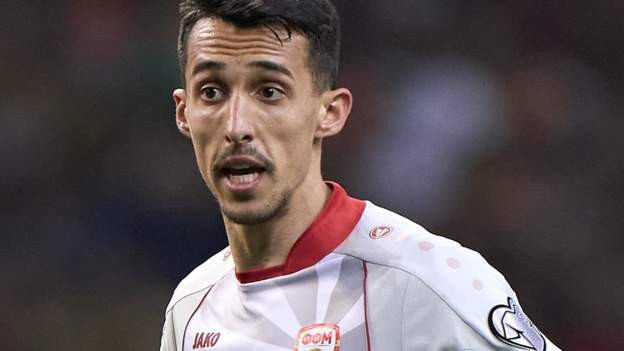 North Macedonia striker Bojan Miovski has signed for Aberdeen on a four-year deal from MTK Budapest.

The 22-year-old, who cost an undisclosed fee, follows Ylber Ramadani who moved from the Hungarian top-flight club to Pittodrie earlier this month.

Miovski has 10 caps, one interatninal goal, and netted 19 in 60 MTK games.

Manager Jim Goodwin said Aberdeen "fought off some stiff competition" to secure the signing, his fifth new recruit this summer.

Goodwin added: "He ticks all of the boxes in terms of profile - he is about 6ft 3in, very mobile, very athletic and a decent turn of pace.

"Most importantly for a striker he has got a knack of being in the right place at the right time.

"There is a lot of room for development as well. The current state he is in he will be a very good striker in the Scottish Premiership but we can make him better and hopefully in two or three years; time we have got a very sellable asset here at Aberdeen."

Calvin Ramsay's move to Liverpool last week gave Aberdeen a club record sale of £4.2m and Goodwin says he is seeking to add another "four or five quality players" as he overhauls the Pittodrie squad.