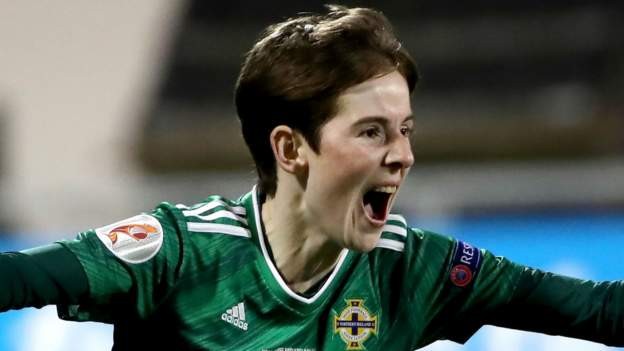 Northern Ireland saw off Belarus 3-2 in a five-goal thriller to edge closer to securing a place in the play-offs for Women's Euro 2022.

Rachel Furness netted a penalty on the hour, Shcherbachenia levelled again but McGuinness' second on 70 won the game.

NI will be in a play-off if they win at home to the Faroe Islands on Tuesday.

Northern Ireland's women's team has never previously taken part in a major championships or been in a play-off to reach one.

Having drawn two and lost two of their first four games of this campaign, qualification for Women's Euro 2022 finals appeared unlikely but wins on the road against the Faroes and Belarus in recent months left Kenny Shiels' side with their destiny in their own hands as they approached this double-header in Belfast.

Norway top Group C with maximum points but NI can clinch the runners-up spot, which would ensure a play-off berth if they can overcome the Faroes at Seaview next week.

NI off to a flying start

The hosts began the game brightly and opened the scoring with a brilliant first-time finish from Sion Swifts striker McGuinness, who fired home after Emily Wilson's initial effort had been saved.

Northern Ireland went close to extending their lead when Furness shot towards goal and visiting goalkeeper Nataliya Voskobovich spilled the ball but after consultation with one of her assistants, the referee adjudged the ball had not crossed the line.

Belarus were back in the game soon after when home goalkeeper Rebecca Flaherty needlessly raced off her line as captain Shcherbachenia latched onto a long ball and drilled a shot low under the advancing NI keeper.

Demi Vance then won the ball, went on a strong run from halfway and unleashed a long-range effort that was well saved by Voskobovich.

The Belarusian keeper then pushed over Wilson's effort from an acute angle on the right as the sides went in level at half-time.

Soon after the restart, lively Liverpool midfielder Furness saw her cross-shot palmed away by the keeper and Lauren Wade was unable to meet the ball at the far post.

The home side's advantage was restored when Julie Nelson appeared to be bundled down inside the area and Furness calmly slotted home the resulting spot-kick.

Belarus fought their way back into the game again in the 67th minute however, as Shcherbachenia ran onto a through ball from Anna Pilipenko and drilled a well-struck drive into the net.

Parity only lasted three minutes as McGuinness' left-foot shot across goal cannoned off the post and bounced off the goalkeeper's head into the net.

A touch of fortune for Northern Ireland, but one they deserved for their superiority.