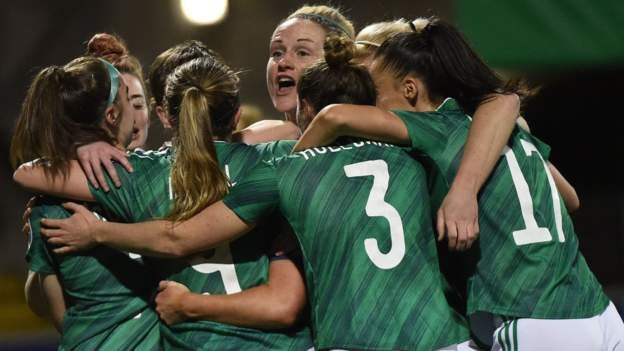 Northern Ireland made history by beating Ukraine to reach the Euro 2022 finals in England.

Marissa Callaghan and Nadene Caldwell scored to give Kenny Shiels' side a 2-0 win on the night and a 4-1 victory on aggregate over the two-legged play-off.

Captain Callaghan tucked home on 55 minutes and Caldwell netted in injury time to secure the win at Seaview. Ukraine had Natiya Pantsulaya sent off.

The Euro 2022 finals will be Northern Ireland's first major tournament.

It caps a remarkable 17-year journey for Northern Ireland, whose women's national team only reformed in 2004.

After a goalless first-half, Callaghan broke the deadlock 10 minutes into the second-half when she beat Ukraine goalkeeper Kateryna Samson to the ball and slotted into the empty net.

It was a goal which perfectly summed up Northern Ireland's persistence as Callaghan won the initial header from Julie Nelson's free-kick before showing awareness to get to the second ball ahead of the sleeping Ukraine defence to give the home side the cushion they had been craving.

Caldwell secured the victory after Natiya Pantsulaya was sent-off late on. Simone Magill won the ball on the edge of the area and Caldwell, who had just come on the pitch as a substitute, beat the stranded Samson to spark wild celebrations.

Northern Ireland, ranked 25 places below their opponents, looked relaxed from the first whistle as they went about finishing the job after they worked so hard to build-up a lead in Ukraine.

Just like in KovalivkaNorthern Ireland came flying at their opponents right from the first whistle, with Kirsty McGuinness and Simone Magill harrying Ukraine's defence.

The positive approach settled any lingering nerves, and while Kenny Shiels is renowned for his enterprising style of football, it was a direct approach from set plays which gave NI half openings.

Laura Rafferty, one of two changes from the first leg, was inches away from opening the scoring when she poked wide after the ball dropped to the defender from an early corner.

Again, in a similar pattern to the first leg, Ukraine grew into the match and began to dominate the midfield as the half wore on.

Despite Ukraine's growing possession on the artificial Seaview pitch, Northern Ireland looked comfortable in defence and Magill, who had a shot comfortably saved by Kateryna Samson, and Marissa Callaghan provided an outlet for Shiels' side.

Rebecca McKenna, on her 20thbirthday, continued where she left off from the first leg and Rebecca Holloway had the best first-half performance of her short NI career to date as both players were tasked with providing width in both attack and defence.

However, it was the experienced head of Julie Nelson who made the most-important intervention of the first half when she superbly denied Olha Ovdiychuk with some last-ditch defending following a rare lapse of concentration for NI just before the half-time whistle.

Hitting their stride in the second half

Cheered on in the stands by the vocal Rachel Furness, who missed the match after sustaining a broken ankle in the first leg, NI came out for the second-half like and looked like a team with the weight off their shoulders.

That soon turned to pandemonium when Callaghan showed tremendous persistence to beat Samson to the ball and score, a goal which meant Ukraine had to net three times to overcome their opponents.

It was akin to when men's captain Steven Davis scored twice against Greece in 2015 to fire Northern Ireland to the Euro 2016 finals in France as Callaghan led from the front.

Northern Ireland dropped deep but still looked in command as the visitors ran out of ideas as the clock ticked down.

They put plenty of crosses into the danger area but goalkeeper Jackie Burns and the defensive trio of Rafferty, Nelson and Ashley Hutton stood strong as NI began to pick Ukraine off on the counter.

Chloe McCarron's cross was just out of reach of Magill and Ukraine were reduced to 10 players when Pantsulaya was dismissed for cutting across the outstanding Sarah McFadden as she raced through on goal.

Caldwell then struck in the final seconds to spark jubilant scenes to cap off a superb display as Shiels' team continue to outshine their underdog status.