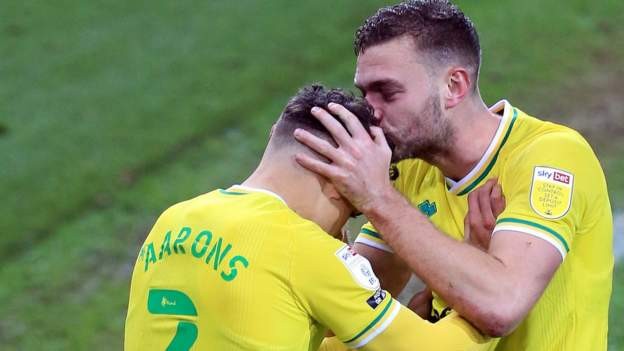 Max Aarons scored his first goal in almost two years as Norwich City regained top spot in the Championship with a late comeback win over Sheffield Wednesday at Carrow Road.

The Canaries had been trailing after Josh Windass - back in Wednesday's line-up after suspension - headed home Adam Reach's cross on the hour.

But the home side turned the match around in the last 10 minutes, with teenage substitute Josh Martin grabbing his first senior goal before full-back Aarons fired in the winner.

The result pushed Wednesday back to the foot of the table and leaves them still searching for their first win since Tony Pulis took charge.

Norwich made a promising start, with Jacob Sorensen finding space inside the box to force an early stop from Joe Wildsmith before the visitors scrambled Teemu Pukki's follow-up behind.

But Wednesday went close soon afterwards as Julian Borner's flick-on was headed off the line by Marco Stiepermann, while Barry Bannan tested Norwich goalkeeper Michael McGovern with a half-volley.

The Canaries struggled to find their rhythm, although they went close early in the second half when skipper Grant Hanley's header sailed just wide from Emi Buendia's corner.

However, Windass marked his return to the Wednesday side by putting them ahead, stealing between two defenders to meet a deep cross from Reach and register his third goal of the season.

The visitors had two penalty appeals waved away after untidy challenges on Kadeem Harris by Hanley and Stiepermann, with the latter making way for Martin 12 minutes from time.

The 19-year-old midfielder made an immediate impact, collecting a return pass from Mario Vrancic to stab home Norwich's equaliser just three minutes after his arrival.

Vrancic was involved again as the Canaries completed their comeback in the 84th minute, setting up Aarons to drill his shot past Wildsmith from close range.

Attempt missed. Emiliano Buendía (Norwich City) right footed shot from outside the box is close, but misses to the right. Assisted by Teemu Pukki.

Attempt missed. Callum Paterson (Sheffield Wednesday) header from the centre of the box is close, but misses to the right. Assisted by Liam Palmer with a cross.

Liam Palmer (Sheffield Wednesday) wins a free kick in the defensive half.

Goal! Norwich City 1, Sheffield Wednesday 1. Josh Martin (Norwich City) right footed shot from the left side of the six yard box to the bottom left corner. Assisted by Mario Vrancic with a through ball.

Attempt missed. Joost van Aken (Sheffield Wednesday) header from the centre of the box misses to the right. Assisted by Joey Pelupessy.

Oliver Skipp (Norwich City) is shown the yellow card for a bad foul.