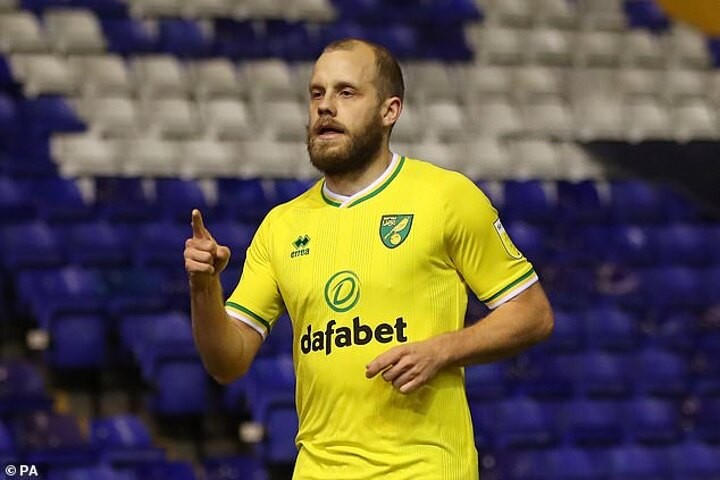 In such a draining and demanding league as the Championship, every team will at some point suffer a wobble. It simply isn't possible to maintain the same relentless pace over 46 games.

The most important thing is how you respond when the blip happens. League leaders Norwich City have offered the textbook example of how to do it.

Daniel Farke's side went down 1-0 to Barnsley in the fourth round of the FA Cup on January 23. No biggie, promotion back to the Premier League was always the greater priority than Cup progress.

A week later they were held goalless at home by Middlesbrough. They failed to muster a single shot on target, which was a collector's item, and there was the added nuisance of star man Emiliano Buendia picking up two bookings. But there was no panic. They still had a six-point cushion to third.

Then, in the space of four days, they were held goalless again, at Millwall, and then beaten 2-0 at fellow promotion contenders Swansea.

With Swansea and Brentford now breathing down their neck, had a blip become a full-blown crisis of confidence? You began to wonder if Norwich's promotion bid would collapse.

Their response could not have been more emphatic. Four consecutive wins, 10 goals scored and a handy cushion re-established at the summit. You can't see them failing from here. They're odds-on with every bookmaker.

The obvious comparison with Norwich is with their last promotion campaign in 2018-19. They're currently seven points ahead of where they were after 32 games then.

But the team Farke has constructed to restore Norwich's Premier League status this time around is actually quite different.

But Norwich have conceded far fewer goals as well to balance it out. Just 25 conceded so far, which makes them the third-best defence in the division behind Watford and Swansea.

Farke has been far more pragmatic with his team selection, the regular midfield pairing of Oliver Skipp and Kenny McLean more minded to shield the defence and cover open spaces than push forward.

That kind of thing is better left to the creative forces of Buendia, Todd Cantwell and Mario Vrancic. It's little surprise Norwich average 15.6 shots per game, higher than anyone else in the league.

The consequence is a team that is balanced and effective in all departments. Farke has smartly created a pragmatic side for a season of such fixture churn it demands pragmatism.

Despite their points gap, Norwich haven't dominated this season's Championship. They might have done if not for injury problems that have at times been debilitating.

At the beginning of December, for example, Farke was deprived of a dozen first-team players including Teemu Pukki, Cantwell, McLean, Jordan Hugill, Kieran Dowell, Onel Hernandez and Tim Krul.

But they persevered and rarely skipped a beat in a relentless rhythm of wins. If everyone had stayed fit, they could well have been on the cusp of mathematically sealing promotion by now.

Their position speaks to a squad depth that is the envy of pretty much every Championship squad but that, in turn, is the result of a strategic masterclass following their sorry relegation from the Premier League.

Ten consecutive defeats either side of the three-month shutdown sealed Norwich's fate and in the end they fell 14 points short of the safety mark. They were accused of not really giving survival a proper shot.

The key after relegation was stability and reassurance, to ensure there was no hangover and Norwich would boomerang right back to the big time.

Their sporting director Stuart Webber told players and staff as much immediately after relegation was confirmed. There would be no knee-jerk sacking of Farke, no firesale of the team's best talents.

Any suggestion Norwich would deviate from their long-term vision of investment in training ground and academy, leading to more home-grown talents steeped in the club's way of playing, with only the occasional big money sale to boost the coffers, was quickly stamped out.

There was no speculation over Farke while, in the end, only two big names were sold, recouping some of the income lost from dropping out the Premier League.

Everton paid around £20million for centre back Ben Godfrey and Newcastle bought Jamal Lewis for £15m.

There was a £20m offer from Barcelona for right back Max Aarons, something that seemed quite surreal at the time, but Norwich's hierarchy calculated that a top-flight return with the 21-year-old in the team was far more valuable in the long run than a quick hit of cash.

So the nucleus of the team that came down was kept together and they were always going to be strong in relation to the rest of the Championship.

Summer signings were targeted and cheap amid the added financial pressures of the Covid-19 pandemic.

Some felt Norwich should have 'done a Fulham' and splashed out £100m or more in an effort to gain a second season in the Premier League. Because they didn't, they weren't totally battered by the Covid crisis, eliminating the need to sell all their top players.

There were some initial signs of a hangover with just one win from their opening four games but from mid-October onwards Norwich have been brilliant.

They hit the top after winning 1-0 at Middlesbrough on November 21 and haven't relinquished that position. There have been wobbles but Farke, the 16th-longest serving manager in England's top four divisions, knows from their 2018-19 experience this is par for the course in the Championship.

The German coach gives public praise to his team when it's due, proclaiming himself 'delighted' or 'unable to ask for more' when they win. There has also been the occasional weird analogy, such as his one involving Keira Knightley to talk about life back in the Championship after relegation.

Argentine playmaker Buendia was linked with Arsenal during the January window but nothing came of it and his understanding in attack with Pukki is devastating at times.

Pukki was the Championship top scorer the last time Norwich went up and he has 17 league goals this time after netting twice in Tuesday night's 3-1 win at Birmingham City.

Buendia, meanwhile, has nine goals and nine assists to his credit in what has been an outstanding campaign. He has been the X-factor in the side, a player who can make things happen for Norwich when not at their best.

Midfielder Skipp, 20, on loan from Tottenham, has been another stand-out performer. He scored his first Norwich goal at Birmingham, capping another performance of flawless passing and defensive screening.

Last week, Farke was full of praise for how his team have become far better at game management, seeing out time when they do have the lead.

Keep going as they are and Norwich won't need all of their 14 remaining games to wrap up their Premier League return. Beat Wycombe on Sunday and then Brentford at Carrow Road on Wednesday and the gap should be sizeable.

But can they make a better fist of it next season? All the signs point to a more mature and streetwise iteration of Farke's side who will certainly put up more of a fight.

Obviously the odds will be stacked against them but with astute moves in the transfer market, they should be better equipped.

But the model is everything - Norwich won't sacrifice the long-term vision by just chucking cash in an effort to avoid the yo-yo tag.