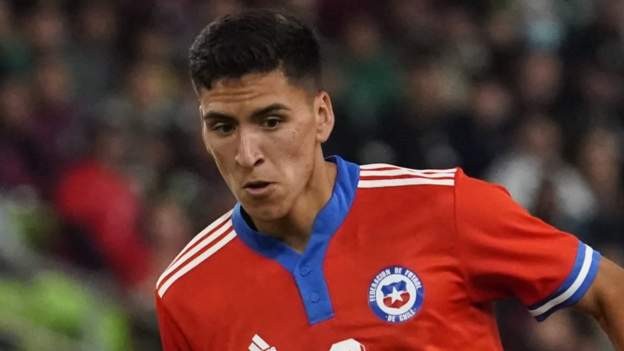 Marcelino Nunez made his international debut for Chile in September 2021

The 22-year-old midfielder, who has won 10 caps, has agreed a contract at Carrow Road to run until 2026.

"He's a player that we believe can connect us from back to front. He can see a pass and open things up," boss Dean Smith told the club website.external-link

"His all-round game is one that we feel is going to suit us and what we've needed."

Norwich are still waiting for a work permit but he could come into contention for Saturday's home match with Wigan Athletic.

"I like to get into the box, I like to go for goal. I like to play in set-plays and be involved in and outside of the box," said Nunez.

"Now I'm here at Norwich, I have my objectives and I want to achieve everything that I can with the club."

The Canaries were beaten 1-0 at Cardiff City in their opening game of the new Championship campaign.