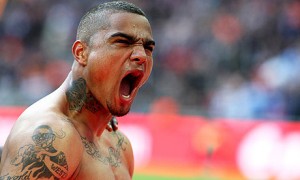 I was reading some comments on a football news website where Kevin-Prince Boateng was reportedly drawn into replying with some angry comments on Twitter.

Those Twitter users were then dissing out on the fact that KPB used the hashtag of #Prince10 in his replies.

The purpose of this fanpost is to analyze whether Kevin Prince Boateng really deserves the AC Milan No. 10 jersey usually reserved for more creative players.

Let's look at the facts (statistics) on Kevin Prince Boateng's Serie-A performance during the 2012/2013 season (statistics were extracted -from the whoscored website-, with some added calculations I threw in between)

The players chosen for the comparison are Marek Hamsik of Napoli, Andrea Pirlo of Juventus, and Borja Valero of Fiorentina, simply because those players from the top 3 clubs provided more assists than the rest of their team members last season.

I threw in Edinson Cavani's name into the table just to provide a fun comparison:

The number of failed shots is alarmingly high. Understandably he's not a striker, but at 2.17% conversion rate, he really should stop trying. Being wasteful is always bad for the team.

Four assists. That's F.O.U.R. in a season. And the number of passes made by the other top 3 players are at least double ofÂ Kevin-Prince Boateng'sattempts. I would let the numbers do the talking. At 1.76 key passes per game, that's not even 1 key-pass for each half of the match.

Don't get me started with long-ball comparison *facepalms*. In general, the other 2 players (Hamsik, Valero) made twice as many efforts, while Pirlo was way a cut above the rest.

With the through-balls, Hamsik and Pirlo attempted three times as much as Boateng, while Valero tried 1.5 times more.

Wouldn't you be surprised to see that 35-year old Pirlo made more successful dribbling attempts than Boateng?

Often he's deployed in the wings, but his cross accuracy is no better than the all-out striker in Edinson Cavani.

What other skills that make a Number 10, other than those 4 things above? your thoughts?