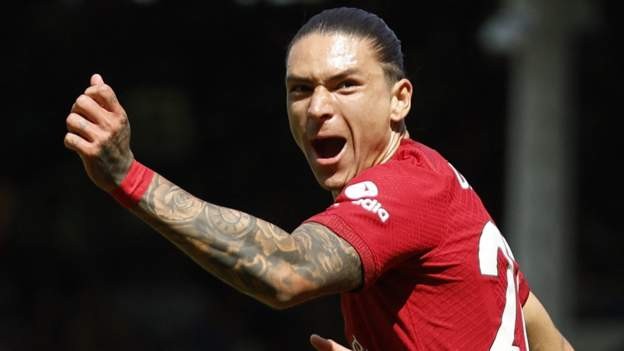 Aleksandar Mitrovic scored his first Premier League goal for Fulham at Craven Cottage since 29 January 2019, when he netted two headers in a 4-2 win against Brighton

Darwin Nunez came off the bench to score one and create another as Liverpool twice came from behind to salvage a point in a gripping game at newly-promoted Fulham.

The Reds, who pushed champions Manchester City all the way in the title race last season, fell behind when Aleksandar Mitrovic got the better of Trent Alexander-Arnold to head Fulham ahead after meeting a superb cross by Kenny Tete.

Luis Diaz had a goal ruled out for offside at 0-0 before curling a shot against the post after Fulham had taken the lead.

In a thrilling match, substitute Nunez marked his Premier League debut by equalising with a close-range flick before Fulham restored the lead from the penalty spot after Mitrovic was fouled by Virgil van Dijk.

Mitrovic picked himself up to beat Alisson from the spot before Mohamed Salah equalised from close range after a pass by Nunez, a £64m signing from Benfica.

Jordan Henderson went close to winning it at the end when he hit the bar in the fifth minute of stoppage time.

Will Aleksandar Mitrovic replicate his scoring feats in Premier League?Reaction and analysis of Fulham-Liverpool, plus Saturday's Premier League latest

Fulham give Reds a real scare

Fulham's previous Premier League win was against Liverpool on 7 March 2021 but, on that occasion, it was not enough to save them from relegation.

On a gorgeous day in west London, they showed they are up for the challenge after giving Jurgen Klopp's side a real scare.

Their aim this season is to establish themselves in esteemed company and, while there is a long road ahead, this was a highly encouraging start.

Last season's champions of the Championship were certainly not intimidated as they took the game to the Reds, the lively Mitrovic signalling his intention by firing wide with 50 seconds on the clock after darting into the box.

Marco Silva's side were well organised and played with confidence as they continued to create chances.

They went close to going 2-0 ahead when Neeskens Kebano hit the post while new signings Joao Palhinha and Andreas Pereira added creativity to the side.

It took Fulham until the fifth game to register a point the last time they started a Premier League season in 2020-21.

They are up and running after one game this time thanks to a dynamic performance from Mitrovic.

Jordan Henderson (Liverpool) hits the bar with a right footed shot from outside the box. Assisted by Harvey Elliott.

Bobby De Cordova-Reid (Fulham) wins a free kick in the defensive half.

Aleksandar Mitrovic (Fulham) wins a free kick in the defensive half.

Harvey Elliott (Liverpool) wins a free kick in the defensive half.

Kenny Tete (Fulham) wins a free kick in the defensive half.

Attempt missed. Fábio Carvalho (Liverpool) right footed shot from the centre of the box is too high following a corner.

Attempt missed. Darwin Núñez (Liverpool) right footed shot from the right side of the box misses to the left. Assisted by Jordan Henderson with a through ball.