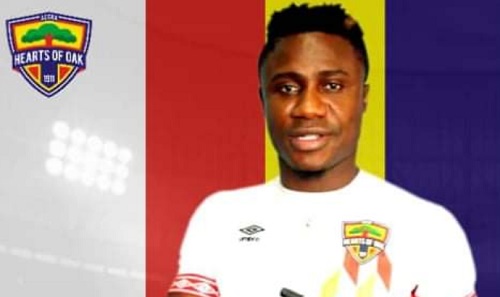 Hearts of Oak defender Nuru Sulley has set sights on winning major trophies with the club following his return to the team after spells abroad.

The 28-year old rejoined the Ghanaian giants after spells in Libya, Egypt, Turkey and Iraq.

Sulley penned a two year deal with the Rainbow club, but his second debut had to be delayed following the cancellation of the 2019/20 season.

However, the strong defender remains ambitious on helping the club return to it's glory days.

“During my first spell at Hearts, the club failed to win a major trophy and, this is not something that was happy about," Sulley told Hearts Media.

“I am here to leave a mark and, I will work tirelessly with the rest of my teammates to ensure that we win on the pitch and win trophies when football returns,” he added.

“Hearts of Oak means so much to me and, I want to repay the trust the board and management has shown to me by bringing me back to the club," he said.

“That will be great joy and together with my colleagues, we will strive to go the extra mile to make the fans very happy by bringing successes again to the club”.

The Executive Council of the Ghana Football Association will hold an emergency meeting on Tuesday to decide on when the next season will begin.

“We will get back to the game and win trophies again," he concluded.

The future of the Ghana Premier League is yet to be decided, with the Executive Council of the Ghana Football Association set to meet on Thursday.