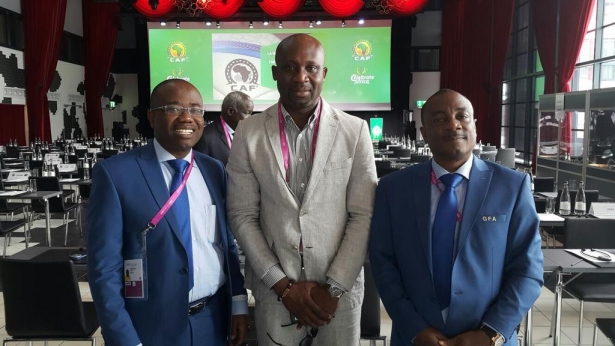 Ghana FA president Kwesi Nyantakyi is leading a three-man delegation from the federation which has arrived in Cairo for the 2018 World Cup qualifying draw to be held on Friday (today.)

Nyantakyi and his delegation have arrived in Egypt, on Thursday night for the third round qualifying draw which will be held at the CAF headquarters.

The trio will witness the draw and then immediately begin the process of planning for an effective way to deal with the qualifiers.

They will also use the opportunity to meet with the opponents of the Black Stars and discuss how and which venues could be used for the away matches.

Ghana has been seeded in pot 1 with Algeria, Côte d’Ivoire, Senegal and Tunisia for the final round of the African Zone qualifiers for the next FIFA World Cup™.

The Black Stars defeated Comoros 2-0 aggregate to advance to the third round of the World Cup qualifiers alongside 19 other countries.

The seeded teams, which includes Ghana and the four pots for the draw have been defined on the basis of a special edition of the FIFA/Coca-Cola World Ranking for African teams dated 7 June, as per the decision of the Emergency Bureau for the FIFA World Cup Qualifiers of 22 June 2016.

The ranking has determined the four pots and the five seeds as follows: