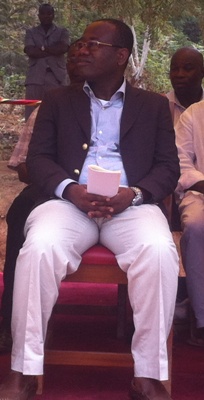 Kwasi Nyantakyi insists his work with CAF during the 2012 Nations Cup was extremely beneficial to Ghana.

The Ghana FA boss has come under intense criticisms following the Black Stars' failed attempt to win its fifth African title in Gabon and Equatorial Guinea.

Nyantakyi was on occasions away from the Ghana camp on CAF duty where he served as the head of the continental body's delegation for the Franceville venue in Gabon.

His critics say his absence was one of the reasons Ghana stuttered at the biennial showpiece since he was unable to discharge his duties as chairman of the Black Stars management committee.

The Caf Executive Committee member has however hit back at his critics Â saying his work at CAF was even beneficial to Ghana's course at the tournament.

"It is true I am the chairman of the management committee but I didn't take decisions alone," he said.

"I was always present when major decisions concerning the team were being taken and we had very competent members there to do the implementation.

"Besides I was feeding the team with vital informationâ€™s and decisions from CAF which was very beneficial.

"And no one is even talking about the role I played in getting some journalists who encountered some problems duly accredited.

"Therefore I think these criticisms are baseless and must be treated with the contempt it deserves."

Ghana finished fourth behind Mali after losing the crucial semi final game to eventual winners Zambia, the same side the Black Stars will meet for the 2014 World Cup qualifying campaign.