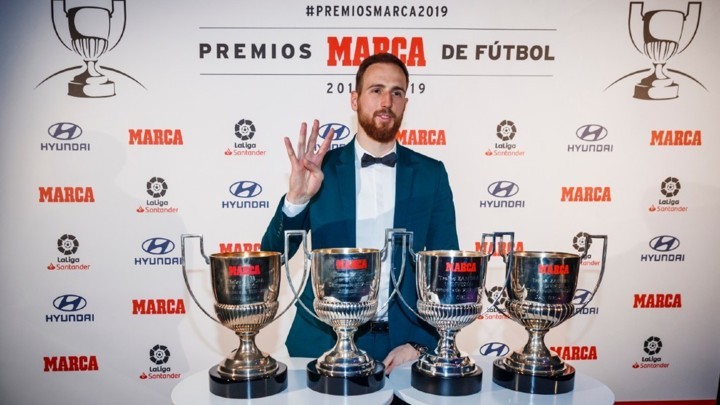 Jan Oblak has won the last four Zamora trophies, moving him to within one of the record five won by both Antoni Ramallets and Victor Valdes.

However, Thibaut Courtois' form for Real Madrid this season has brought his fifth title under significant threat.

In fact, the Belgian leads the standings in the race for the Zamora trophy having conceded 0.67 goals per game (16 goals in 24 games) in LaLiga Santander this campaign.

Meanwhile, Oblak has conceded 0.78 goals per game (21 goals in 27 games) for Atletico Madrid this season.

In order to overtake Courtois, the Slovenian international must concede five fewer goals than him in the remaining 11 fixtures this season.

If you take Oblak's ratio of 0.54 goals conceded per game from the first fixture against those teams in LaLiga Santander, it would take his total ratio to 0.71.

However, if you did the same for Courtois for Real Madrid's first fixtures against their remaining opponents of Eibar, Valencia, Mallorca, Espanyol, Getafe, Athletic, Alaves, Granada, Villarreal and Leganes, the Belgian would still have the better ratio of the pair with 0.68 goals conceded per game.

Given this context, it's clear that Oblak will have to perform even better against these teams the second time around and hope that Courtois does worse than his 0.72 ratio he recorded against his opponents the first time around.