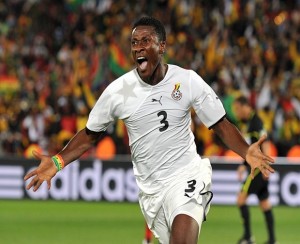 Gyan, who plays for UAE side Al Ain, suffered a hamstring injury last week while playing for his club in a league game.

He was ruled out for three weeks which means he recover just before the start of the competition on 21 January.

The former international says Gyan must be dropped because his fitness for trhe tournament cannot be guaranteed.

â€œIf is going to take him about three weeks to recover then I think the coach should be bold and drop him,â€ Lamptey told Joy FM.

â€œThis is a competition that you play almost every two days and before you can make an impact you have to be fully fit, so it is up to the coach to decide but I think if he does not recover on time then it will be appropriate to drop him.â€

Gyan has arrived in Ghana and he is hoping to get further treatment for the Black Stars medical team top be fit for the tournament.

Do you think Asamoah Gyan should be dropped for the Nations Cup?

Make your views in the box below: