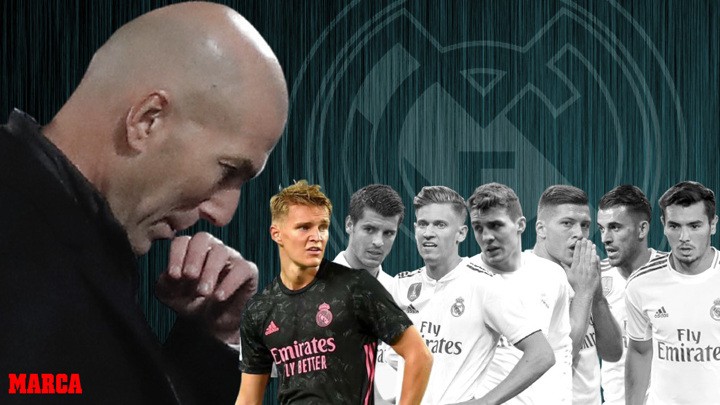 Martin Odegaard has become the latest in a list of highly promising young players who have sought the exit door with Zinedine Zidane as coach of Real Madrid.

The Norwegian wants to leave Real Madrid, having had little playing time since returning from his Real Sociedad loan in the summer.

Here, we look at the other eight similar victims during the two Zidane spells in charge.

Morata: One of the first to leave

While he was at Real Madrid, Alvaro Morata had one of the best seasons of his career under Zidane, in the double-winning side of 2016/17.

However, when it became clear that his role as an understudy to Karim Benzema would not change the following season, Real Madrid sold him to Chelsea for 80 million euros.

In Zidane's first spell, he viewed Mateo Kovacic a key component of his central midfield, to step in when either of Luka Modric or Toni Kroos were unavailable.

However, injuries hampered his form the following season and he followed Zidane out the club at the end of the campaign, on loan to Chelsea.

When Zidane returned, he had the option to bring the Croatian back to the club at the start of the 2019/20 season, but he sanctioned his permanent transfer to the west London club.

The star AC Milan left-back was never valued during his spell at the Estadio Santiago Bernabeu.

Arriving in the summer of 2017, he hardly played under Zidane in his first season, before being loaned out to Real Sociedad when Julen Lopetegui arrived.

When Zidane returned, Hernandez did not. He instead signed for AC Milan for 21m euros and has not looked back since.

Ceballos: Always in the shadows

Zidane has always viewed Dani Ceballos as surplus to requirements.

In his first spell Isco was his first choice and, in his second spell, he relegated Ceballos to the bench.

Now, Ceballos is into his second season on loan at Arsenal and believes that his own opportunities to succeed at Real Madrid with Zidane as manager are minimal.

Brahim Diaz: Zidane likes him, but he didn't play

Zidane has always said that he likes the Malaga-born attacking midfielder, but has always justified his lack of minutes by speaking of a bloated squad and competition at his position.

Last season, Brahim only played 10 matches and, as a result, he decided to try his luck at AC Milan this campaign, where he is making great strides and is now a vital part of their squad.

Reguilon: He left and Mendy arrived

At the start of last season, Sergio Reguilon was expected to be on the bench, but his coach asked to sign Ferland Mendy to complement Marcelo, so the former youth team player was loaned to Sevilla.

At the start of this season, he had the option to return, but Real Madrid sanctioned his permanent transfer to Tottenham for 30m euros, although the deal has a buy-back option.

Llorente: An explosion at Atletico Madrid

After returning from his loan deal to Alaves in the summer of 2017, Marcos Llorente only played 20 matches under Zidane in that season.

After gaining the trust of Santiago Solari, Zidane's return saw his opportunities limited once more and he advised him to look for another club.

At the beginning of the 2019/20 season, he moved to Atletico Madrid, where he is playing higher up the pitch than ever before and having an exceptional impact.

Jovic: Zidane wanted him, but...

Luka Jovic's case is a strange one. The striker, who Zidane had specifically requested, cost Real Madrid 60m euros, but he failed to adapt and experienced a lack of game time.

Zidane used him in last season's Supercopa de Espana in Saudi Arabia after Benzema was injured and little since then, before he returned to Eintracht Frankfurt on loan this January.