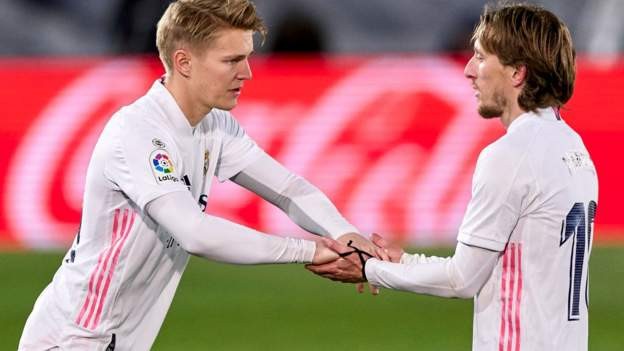 Martin Odegaard, right, has featured for Real Madrid in La Liga and the Champions League this season

With Mesut Ozil set to join Fenerbahce, the Gunners have enquired about signing the 22-year-old until the summer.

Odegaard has fallen out of favour at the Bernabeu in recent months.

"He wants to go to Real Sociedad and they want him," said Balague. "They're waiting on Real Madrid's decision."

Odegaard, who was tipped as a future star when he moved to Spain from Norwegian side Stromgodset as a 16-year-old, impressed on loan at Sociedad last season.

After returning to the Bernabeu in the summer, it seemed he might become a first-team regular under Zinedine Zidane, who coached him in the B team when he first joined the club and is now in charge of the senior side.

But after starting the first two La Liga games of the season, Odegaard has only featured once from the outset of a league game since. And that was on 21 November.

"Arsenal are not the only Premier League club who have made enquiries about him but he would like to go back to Real Sociedad," said Balague. "The adaptation process will be easier there and all he wants is to play.

"Since 1 December he's played only five minutes. He played against Shakhtar Donetsk in the Champions League on that date then he got an injury and was out for three games. But he has barely featured since.

"There are some pictures of Zidane losing his cool because he didn't pressure in one incident and didn't track back in a game they won, so the suggestion is he's not at the level defensively that Zidane wants.

"It goes back to this idea that Zidane doesn't do well with youngsters and their development. That has disappointed Real Madrid.

"The question is whether Real's loss to third division Alcoyano on Wednesday changes anything. Before that game they had decided to let Odegaard go. The decision is just where he goes to."

'A little short in certain areas'

Arsenal manager Mikel Arteta was asked about Odegaard on Thursday but did not want to speak about specific targets.

However, he did make it clear he is hoping the Gunners will be active before the 1 February transfer deadline.

Sokratis Papastathopoulos was released from his contract this week, while Sead Kolasinac and William Saliba have already departed on loan deals and Ozil's switch to Turkey is set to go through but is being held up by quarantine rules.

"We have done the first part more or less and we are focusing now on the second phase," said Arteta.

"Obviously this market and the context makes it difficult, but we are looking at options and we will see what we can do.

"We are looking at various positions because the movement we have made in this window with some players leaving the club has left us a little bit short in certain areas.

"So if we can, we will do it and if we can't, we will keep going with what we have."