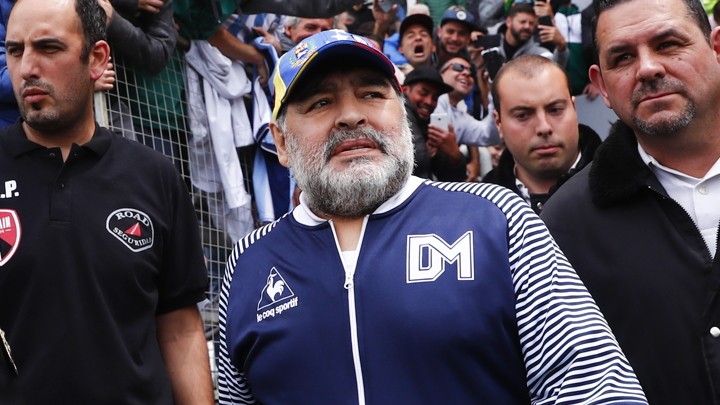 Diego Maradona will remain as Gimnasia coach until the end of the 2020-1 season after extending his contract, the club confirmed on Wednesday.

The 1986 World Cup hero arrived in La Plata in September 2019 with the club mired in relegation trouble having lost four and drawn one of their opening five games.

Gimnasia will remain in the Primera Division for the coming term, however, after relegation was suspended due to the coronavirus pandemic.

And they will also boast Diego on the bench once more after he agreed a one-year extension with the Lobo.

"You are known as Pelusa, the Cosmic Kite, God, Diego, Diegote, captain," the club wrote on its official Twitter account.

"But to us you are another Tripero and your heart is already as white and blue as ours is. Gimnasia 2021 Maradona."

Maradona's return to Argentine football - where he had previously coached in 1994-5 during brief spells with Deportivo Mandiyu and Racing Club and starred as a player for Argentinos Juniors, Boca Juniors and Newell's Old Boys - caused a stir not just at Gimnasia but across the Superliga.

Membership numbers at the Tripero increased by more than 5,000 in the space of a few weeks, while each away game was greeted by lavish tributes for the coach and standing ovations from the terraces.

Many clubs even went as far as to provide a leather 'throne' for Maradona to sit on and observe each game instead of the substitutes' bench.

On the pitch, meanwhile, having suffered a rocky start with three consecutive defeats after taking over, the former Argentina, Dorados and Al-Wasl boss oversaw a modest improvement in La Plata.

Gimnasia won six, drew five and lost 10 of their fixtures under Maradona, a run that lifted them to 19th in the Superliga standings at the league's close while keeping the club rooted to the bottom of the average points table that decides relegation.

But with the drop suspended for both 2020 and 2021, the Lobo can now look to the future with Maradona in tow, after initial speculation that the legend would depart in the close-season.