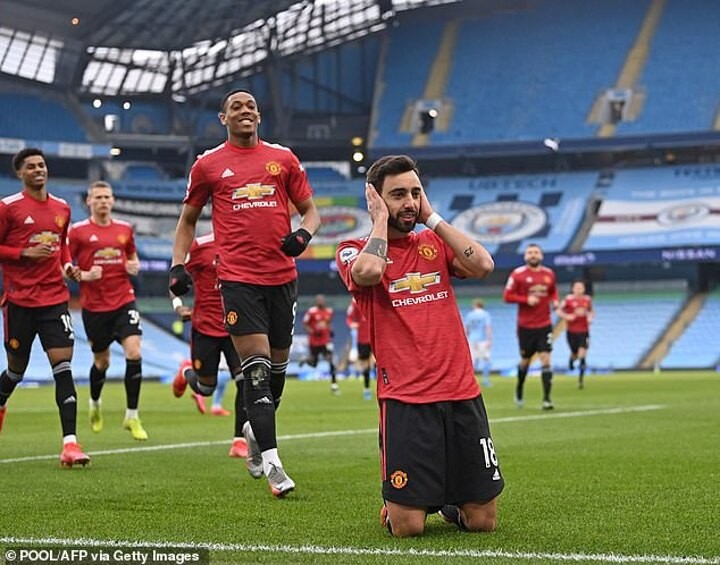 Ole Gunnar Solskjaer still feels a title challenge is beyond his Manchester United side despite the Red Devils ending Manchester City's 21-game winning run with an impressive victory at the Etihad.

A second-minute penalty from Bruno Fernandes and a rare Luke Shaw strike saw the visitors claim an unlikely three points to see them move back above Leicester and into second.

The result cuts the gap to City to 11 points, but Solskjaer believes that - despite his team's triumph and the fighting talk of Bruno Fernandes - a first Premier League crown since 2013 is slightly too ambitious.

'We just take one game at a time, of course they are too far ahead to think that we could catch them,' he told Sky Sports.

'Last year we caught 15 points on Leicester, but these are a different proposition.'

Solskjaer was thrilled with the manner of the win, which makes him the first manager of the club's history to win his first three away meetings as a manager at the home of their near neighbours.

'When you come away with a 2-0 win, another clean sheet and a performance like this you're delighted of course.

'Every game is different, but we've gone back a little bit to what we want to be as well; that is more direct, more straightforward, attacking players being positive.

He also reserved particular praise for Anthony Martial, who excelled after coming into the contest as an injury doubt with a knee problem.

'I thought Anthony (Martial) was absolutely superb today, more of the Anthony of old and to think he was a doubt until after the warm-up, fantastic.'

Solskjaer's attentions next turn to European matters as United host AC Milan on Thursday in the first leg of their round-of-16 clash, before another home game against high-flyers West Ham next Sunday.

The return leg of their Europa League tie then follows on March 18, before Solskjaer's men round off the month with a trip to Leicester in the FA Cup.