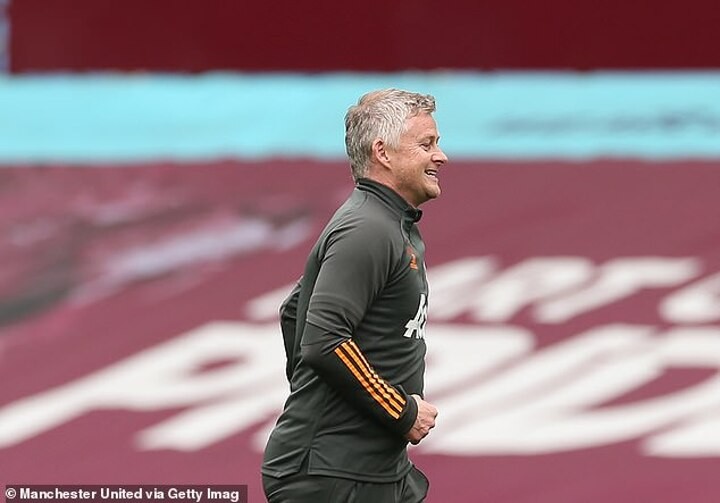 Ole Gunnar Solskjaer was full of praise for his Manchester United side after they battled to a 3-1 over Aston Villa to keep the momentum going during a chaotic period of fixtures.

After overcoming Roma in the Europa League on Thursday, United extended their unbeaten run away from home in the Premier League to 25 matches with victory at Villa Park.

Solskjaer's men now face Leicester on Tuesday before welcoming Liverpool to Old Trafford just 48 hours later, but the United boss was in upbeat mood looking ahead to the manic schedule.

'We can just go into the next one confident, go and enjoy it,' Solskjaer told SkySports.

'It's always going to be difficult after you've been in Europe, in Rome, and didn't come back until half four, five o'clock in the morning on Friday.

'Great reaction at half-time again even though first half, I felt we were the better team. We created more chances, but we couldn't get the goal.'

This was the 10th time that United have conceded the first goal away from home in the league this season, and once again they went in behind at the break.

But goals from Bruno Fernandes, Mason Greenwood and Edinson Cavani ensured another comeback win to all but guarantee the club's place in the top four.

United have now won 31 points from losing positions, and their manager refused to criticise his side for another slow start.

'I can't blame them,' Solskjaer said. 'The advantage of being fresh going into a game like this is quite high. It's coincidence.

'We could have scored the first goal once or twice before they scored. They scored from nothing, good goal by the way.

'I'm pleased with everyone. I know how hard it is at the end of a long, long season.'