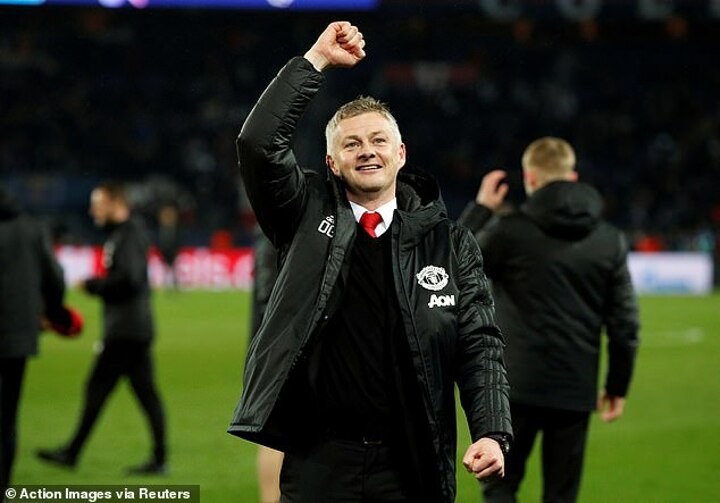 Ole Gunnar Solskjaer returns to the scene of his most famous triumph on Tuesday night when Manchester United make their long awaited return to the Champions League against Paris Saint-Germain.

The Norwegian sealed his long-term future at Old Trafford with an incredible 3-1 victory at the Parc des Princes in March 2019, as the club legend rallied a group of disillusioned players left behind by Jose Mourinho to clinch a huge win.

The United that returns to Paris is very much Solskjaer's team and the task could not be much greater as the Red Devils look to kickstart their Champions League journey with a win over last season's finalists. Sportsmail compares the likely starting line-ups for the clash in the French capital.

Keylor Navas: Started the season strongly with four clean sheets from five - letting in a consolation goal in the 6-1 win over Angers. The Costa Rican's role in the all-conquering Real Madrid side was often overlooked, but his know-how will be heavily relied upon as the inexperienced Parisians look to clinch the elusive Champions League title. 8/10

Alessandro Florenzi: The Italian's loan switch from Roma came as a surprise this summer, but the 29-year-old has settled into life well in the French capital. The right back already has two goals in five games and will offer a threat to United's left-hand side. 7/10

Marquinhos: After several years under the wing of Thiago Silva, Marquinhos has stepped out of the shadow of the Brazilian to take the armband for Thomas Tuchel's side. The 26-year-old's natural leadership will be integral to PSG's challenge for top honours in Europe. The bedrock of the side's impressive defence. 8/10

Presnel Kimpembe: The French international has big shoes to fill following Silva's exit, and has improved following a shaky start to the campaign. The 25-year-old featured in the French champion's opening two league defeats of the season, but has looked far more assured with Marquinhos beside him. 6/10

Layvin Kurzawa: A toss up between the Frenchman and young Mitchel Bakker, who has deputised admirably while Kurzawa has been suspended for his role in the ugly brawl against Marseille. Tuchel is likely to opt for the 28-year-old's experience, though, having featured in last season's final. 6/10

Ander Herrera: A player whose importance wasn't fully appreciated by Manchester United until he left Old Trafford for Paris for free a year ago. The Spaniard's work rate and quality on the ball make him an essential figure for Tuchel, who has called on the 31-year-old in every game this season. Herrera will no doubt be out for revenge against his former club. 8/10

Leandro Paredes: Like Bakker and Kimpembe, Paredes is another of PSG's stars who remains a slight mystery. The Argentine was a key part of the side's run to last season's final but you get the feeling he is yet to announce himself on the European stage. 7/10

Marco Verratti: The longest-serving player in this starting eleven, but at 27, the Italian still has plenty to achieve with the French giants. To have survived under a legion of different managers speaks volumes of Verratti's ability, and his leadership will be called upon in this season's journey. 7/10

Angel Di Maria: After his tumultuous spell at Old Trafford, all had appeared lost for a player totally devoid of confidence, downtrodden by a manager in Louis van Gaal that lacked faith in him. But moving to Paris has rejuvenated Di Maria, who has proved an important component of the side's impressive front three. Has one goal and two assists from four games this season. 8/10

Kylian Mbappe: A man who will no doubt be causing United's defenders a restless night's sleep ahead of Tuesday's crunch clash. When on form, there aren't many attackers on Mbappe's level in world football. Uncharacteristically missed a glut of glorious opportunities in last season's final, but will be out for vengeance this campaign. Has four goals and four assists from four games. 9/10

Neymar: No one will be hurting more from last season's agonising defeat than the Brazilian, who is desperate to deliver the Champions League trophy many expected when he joined from Barcelona for £198m. Two goals and an assist in three appearances suggest the Brazilian means business. 8/10

Thomas Tuchel: Has won over a dressing room that does not take fools lightly. The German is popular among the players, who all appear to be united in their determination to deliver the coveted European prize. 8/10

David de Gea: Undeniably one of the best goalkeepers in the world in the last five years, but has lost the edge that saw him head and shoulders above his rivals a couple of seasons ago. Will hope that Tuesday is not one of his inconsistent nights between the sticks. 6/10

Aaron Wan-Bissaka: Defensively one of the best full backs in the Premier League, Wan-Bissaka will fancy his chances to lay down a market against whoever is deployed on PSG's left-hand side. His shortcomings are exposed going forwards, though, with the youngster often found wanting in the attacking third. 7/10

Victor Lindelof: The Swede has all the makings of a modern-day quality centre half, but has been caught on numerous occasions making blunders that ultimately cost United. Will have to be at the top of his game to keep the likes of Mbappe and Neymar quiet in Paris. 5/10

Eric Bailly: Likely to be called in to replace Harry Maguire, who has been left at home for the trip to Paris, in what is a somewhat surprising move for a player so heavily relied upon by Solskjaer. The thinking may be that Bailly's pace can help stifle PSG's rapid attack, although the defender's last game in a United shirt came against Spurs - the less said about that, the better. 5/10

Alex Telles: A toss up for Solskjaer between his new signing and Luke Shaw. It would probably be unwise to throw the Brazilian in the deep end for his first outing in red, but Shaw's own goal against Newcastle and lacklustre start to the campaign means the former Porto man might get the nod in Paris. 7/10

Nemanja Matic: Written off by a large portion of the United fanbase but enjoyed an upturn in form after lockdown, the Serb will be hoping to get back to that level in order to win the midfield battle on Tuesday. Solskjaer will look to Matic to protect his vulnerable defensive pairing in the centre of the park. 6/10

Paul Pogba: A big night for the Frenchman to prove that he remains one of the best midfielders in world football. The World Cup winner has endured a poor start to the campaign, with doubts growing as to whether he will ever deliver for United. Spoke of his desire to join Real Madrid last week, in a prospective transfer that looks less likely as the months pass. 5/10

Bruno Fernandes: United travel to Paris thanks in large part to the contributions of their £68m January arrival. Without the performances of their Portuguese star, who has quickly become their talisman, the outlook at United would be very bleak indeed. Has been the bright spark in an altogether underwhelming start to the season. 8/10

Mason Greenwood: Was left out of Solskjaer's squad for Newcastle and most likely to miss out in Paris on Tuesday night. There is no denying that Greenwood is one of the most talented stars of his age, but the attacker looks a shadow of the player that helped propel United into the top four last season. 6/10

Anthony Martial: The Frenchman is growing into the No 9 role that he has longed for since arriving at Old Trafford over five years ago. There is more intelligence to his play in the centre and when he is on song, United often get a good result. Needs to get off the mark sooner rather than later, though. 7/10

Marcus Rashford: Put in his best performance of the season against Newcastle on Saturday and Solskjaer will be relying on the Englishman to put in another sublime display on Tuesday. The winger will be crucial if United want to be effective on the counter attack. 8/10

Ole Gunnar Solskjaer: Has been in the job for around 18 months now and question marks remain over the Norwegian's idea for this United team. Clearly liked by those in the dressing room but every defeat is often met with concerns that the club legend will face the sack. 6/10

While the Parc des Princes will contain many happy memories for Solskjaer after that dream night a year and a half ago, he will need his United side to pull out a dream performance if they are to emerge triumphant once more. Rashford and Fernandes will be crucial while Lindelof and Maguire will need to shackle Neymar and Mbappe.