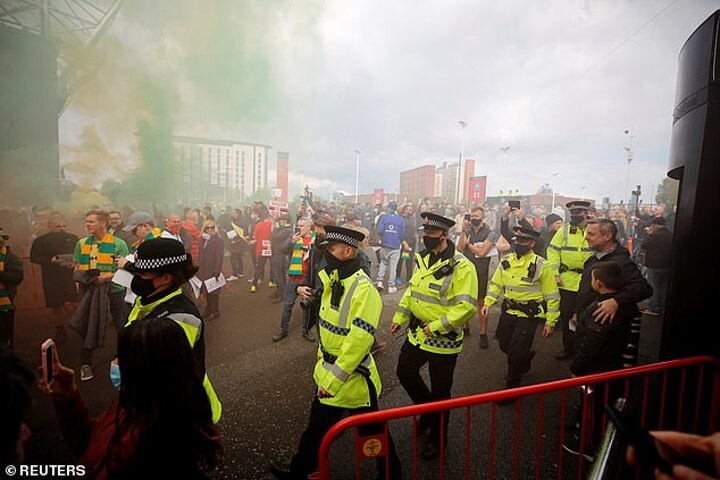 Manchester United will seek police and security advice ahead of this week’s home games against Leicester and Liverpool because of fans’ protests.

United’s match against Liverpool was postponed last weekend after supporters gathered at Old Trafford and The Lowry Hotel in Salford where the team usually gather before games.

Since the demonstration, which saw police and fans injured in clashes, United owner Joel Glazer has attempted to defuse the situation by inviting supporters for talks but the proposal has received a lukewarm response.

United are away to Aston Villa today at the start of three Premier League games in five days with Leicester’s visit to Old Trafford on Tuesday followed by Liverpool’s arrival 48 hours later.

The club have taken new measures to improve security as fans threaten further protests this week. A new, more imposing, barrier has been installed at the entrance of their Carrington training base and the number of security guards has been increased significantly to about 50.

The timings of the players’ departure for the airport on Wednesday were kept a close secret to avoid information being leaked to groups determined to disrupt their trip to Italy to face Roma.

Solskjaer fears the huge rift between United’s support and the American owners will eventually impact on the team’s prospects.

‘Hopefully the fans will see that we are working in the right way. I want us all to come together and unite and get up the table.’

Solskjaer would like to stick to United’s regular preparation for their home games but accepts the club will have to heed the advice of experts. ‘We want to keep it as normal as possible of course because you like to prepare for games in a certain manner.

‘It’s impossible to prepare as we normally do with only one day in between the games, so the prep will be different but the off-field stuff hopefully we’ll keep it as normal as possible.’

The disconnect at the top of the club is in contrast to United’s improvements on the pitch. They are second in the league and face Villarreal in the Europa League final on May 26 — the date they famously beat Bayern Munich in the 1999 Champions League final and also the birthday of legendary former manager Sir Matt Busby.

‘Even though I’m not superstitious, I hope it’s a good omen,’ smiled Solskjaer.

Van der Sar, who performs a similar role at Ajax, is one of several names linked with the job.