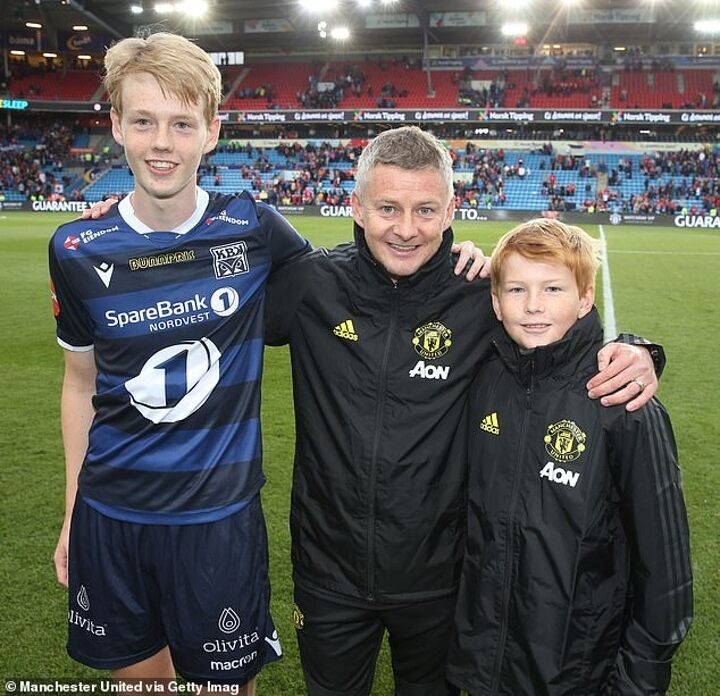 Ole Gunnar Solskjaer's son, Noah, has become embroiled in the ongoing row between the Manchester United manager and rival Jose Mourinho by insisting: 'I always get food, I can assure you'.

Solskjaer and Mourinho have traded blows since full time of Manchester United 3-1 win at Tottenham on Sunday after the Red Devils boss hit out at Son Heung-min's reaction to being caught in the face by Scott McTominay.

The South Korean was struck by the Scot's hand during the build up to a goal that was later chalked off by VAR.

United went on to win the game in north London but Solskjaer was left furious after he perceived Son's reaction to be too dramatic.

'If my son stays down like this for three minutes and he gets his 10 mates around him to help him up, yeah, he won't get any food,' Solskjaer said in his post-match interview.

'I'm saying the same now as I did the first time we played them. We weren't conned, the referee was.'

Mourinho was left furious by the comment and hit back, saying Son's father is a 'better person' than his managerial rival.

The Portuguese replied: 'Sonny is very lucky that his father is a better person than Ole. Because as a father you have always to feed your kids, doesn't matter what they do.

'If you have to steal to feed your kids you steal. I'm very, very disappointed. With me, like we say in Portugal, bread is bread and cheese is cheese. I have told Ole already what I think about his comments.'

But Solskjaer's son Noah has now thrown himself into the midst of the feud, joking 'I always get food' and insisting Mourinho's reaction was 'to take the focus away from the face they had lost'.

'Yes, I laughed a lot on Sunday too,' the youngster told local newspaper Tidens Krav.

'I always get food, I can assure everyone about that.

'[Teammate] Max [Williamsen] asked me if I had been given food when he met me before training today.' He continued: 'I have never been lying down the way Son did. 'Mourinho probably just wanted to take the focus away from the fact they had lost.'