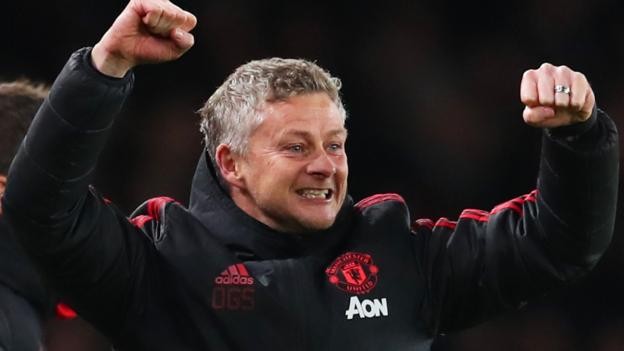 Manchester United manager Ole Gunner Solskjaer believes his side "can go all the way" in the Champions League after drawing Barcelona in the quarter-final.

The draw sees caretaker boss Solskjaer return to the Nou Camp 20 years on from scoring an injury-time winner there in the 1999 Champions League final.

United would meet Liverpool in the semi-finals should both sides progress.

"I think we've shown against Paris St-Germain that on any given day we can beat a top team," said Solskjaer.

"Any team can beat anyone of the eight. There's still top, top quality. Of course, with Cristiano [Ronaldo] still in it I don't think it's opened up that much."

Solskjaer's side became the first team to overcome a 2-0 or greater home first-leg deficit in the Champions League as they defeated PSG 3-1 to progress from the last 16.

The away-goal victory was sealed by Marcus Rashford's injury-time penalty, which was awarded by the video assistant referee (VAR) following an anxious wait.

"There are so many variables and these games will be decided by margins. Of course that VAR, even though for me it's a penalty, you can still be unlucky and not get it in the last minute and then we'd be out and no one would really remember the PSG performance.

"I believe that you get what you deserve in life, in sports. If you put the work in, if you work hard, show the right attitude, if you go in every single day and do the right things you can maximise your chances.

"So yes, we can go all the way but you've got to be lucky and good along the way."

Unlike their treble-winning 1999 campaign, Manchester United are not in contention in the Premier League title race - though they do remain in the FA Cup and face Wolves on Saturday at 19:55 GMT, live on BBC One and the BBC Sport website.

Arsenal inflicted a first league defeat on Solskjaer on Sunday to leapfrog their opponents and leave United two points adrift of fourth spot in the race for a place in next season's Champions League.

The Norwegian says that defeat was necessary "to feel how much it hurt".

He added: "Any game you lose is a big anti-climax. It's the worst feeling you can have and that's maybe the only good thing about that Arsenal defeat.

"The more games you win, the more confidence you breed, the more hunger there is in the players. Every single game that you win puts another layer on that, on the way to becoming the team that we want to be. So I don't agree that teams should go out of this and this to focus on that.

"To win trophies you've got to win at least one or two really tough games. They're like defining moments. We beat Liverpool, we beat Chelsea, we beat Arsenal back then [in 1999], and you think 'we deserve a little bit of luck in the draw next time' but Wolves away, what a difficult game that can be.

"We're not challenging to win the league this year but we are challenging for the other two trophies. The confidence in the players is sky high. The mood is good, the training attitude is good, so hopefully we can keep that run going."

Former midfielder Scholes had signed an initial 18-month deal, but resigned by text on Thursday according to club owner Abdallah Lemsagam following a six-game winless run.

The Manchester United manager says he has "invited" Scholes to visit Carrington for a chat about his decision and to learn from his coaches.

"He's probably got his reasons why he left. I've texted with him of course and it didn't work out as he wanted, so that's just management," said Solskjaer.

No news on Bale as United search for quality

Despite being appointed as caretaker manager and not yet being confirmed as the club's permanent successor to Jose Mourinho, Solskjaer continues to plan ahead at Old Trafford.

During his tenure, Mourinho had hoped to sign Real Madrid forward Gareth Bale, but Solskjaer was unwilling to discuss the Welshman, who has been booed by some Real supporters this season.

"I can't really comment on Gareth Bale or specific names because they're property of other clubs," added Solskjaer.

"But we should look for quality players, definitely, and players who could improve us as a team."