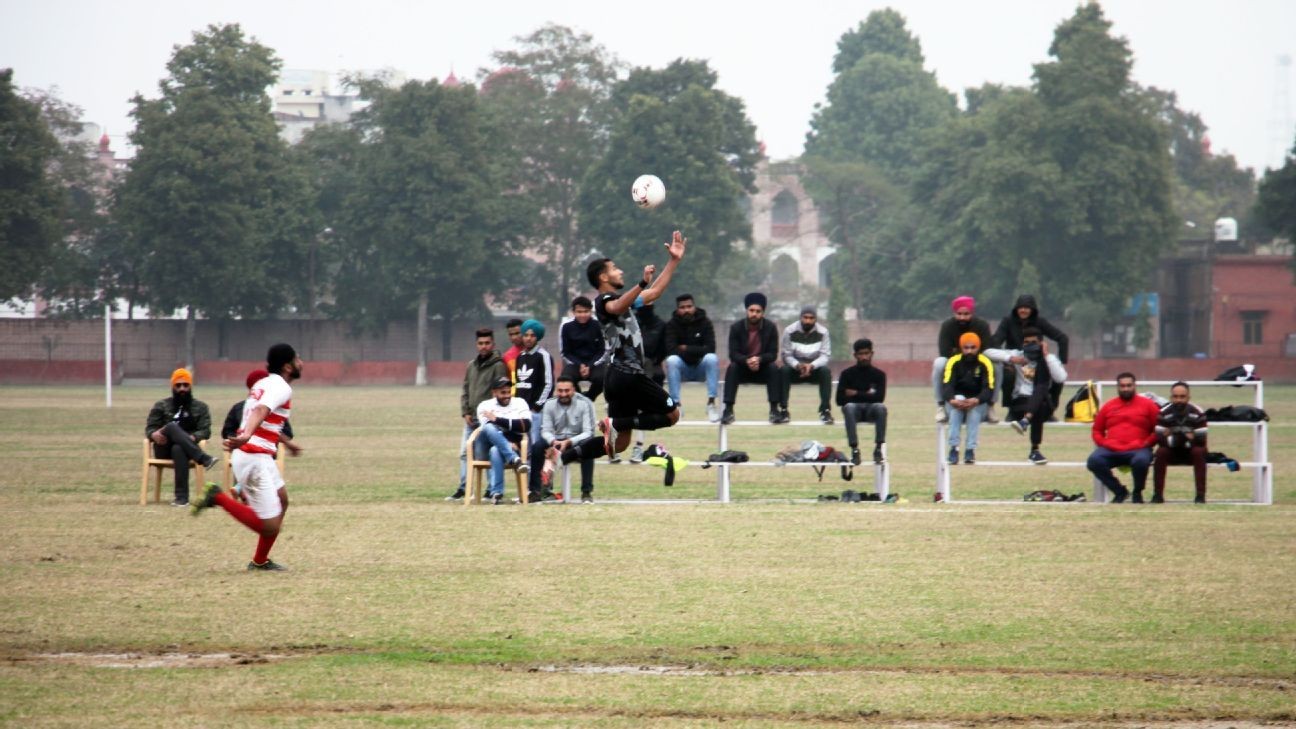 Amid the crowd of pilgrims at the Golden Temple in Amritsar last Wednesday evening, was a young man of 20. Anwar Ali had played a match that afternoon for Minerva Football Club and his teammates had suggested the trip following the game. "It felt good to go there. God ko samne se dekhte hain waha (You get to be face-to-face with God there)," he says.

The only other time he'd been there was five years ago. "Again, I'd just played a match," he told ESPN in an exclusive interview. "I was an under-14 player with dreams of playing for India. A few years later, I was playing for India in the FIFA U-17 World Cup."

Ali will hope coincidence strikes twice. His appearance at that World Cup in late 2017 made him one of the brightest prospects in Indian football. He was a regular for the Indian Arrows in the I-League, part of the senior India team camp under national coach Igor Stimac, and then signed a contract with Mumbai FC in the Indian Super League.

And then, his career stopped. He was barred from playing in 2019 by the All India Football Federation (AIFF) after the detection of a congenital heart condition - Hypertrophic Cardio Myopathy. Two different sets of doctors concluded that the risk of playing was too high, though another expert gave a differing opinion to the AIFF medical committee. A court battle later, Ali was permitted last November to play by the Delhi High Court pending a final decision by the AIFF committee.

And so, after over a year's break from the sport, Ali played his first professional football game on December 6 last year. It was not, as he'd hoped, a triumphant return to the top flight; his comeback was far from the manicured grass and bright lights of the ISL. Instead, he was in the village of Khad - population 1200 - in the hill state of Himachal Pradesh, playing a local league game on a rocky, uneven field. "I wasn't nervous at all, I was just so excited. Just knowing that I was going to get back to the field and play professional football again made me so happy," he says.

It helps in a way that he's back on familiar ground: with Minerva, the club of his youth, playing in the second division of the Punjab state league. It's not easy, though; there are no plush hotels and refined travel arrangements to look forward to these days. To play that match in Amritsar last week, Ali woke up at 3 am for the journey on the same Minerva team bus he'd travelled in as a rookie five years back.

Ali - speaking for the first time at length about his condition - admits this has taken some getting used to. "It's a challenge knowing I have to start my career from the beginning. At the start, it was tough. When I got on to the team bus at 4 am, I realised I was on the same bus I used to travel on when I was a junior. I was back in the same position. It was a reminder that I might have been playing at such a high level before. Now I'm back at the starting level," he says.

It was the anticipation of an eventual return to football that kept him going all those months, he says. "Even when I wasn't allowed to play, I did what I could to stay connected with football. I trained by myself when clubs didn't let me train with the rest of the team. There were moments where I wondered why I was putting in so much effort. There were times when my parents or (Minerva owner) Ranjitbhai would say something to motivate me. But I'd feel better simply when playing football. Just playing kept me motivated. At one point I had to go back to my village [Chumo, in Jalandhar] and all I could do was play with the boys there. And that's what I did. They said play with us now but jald se jald ISL khelo (get back to the ISL as soon as possible)."

At each of his four matches with Minerva, though, is a constant reminder of what kept him away from the game: Adjacent to the field is the mandatory ambulance with the Automated External Defibrillator, which is what he'll need in an emergency. Although Dr. Sanjay Sharma - associated with the English FA's cardiology panel - had vouched for Ali's ability to continue playing professional football, he had also mentioned that the risk of mortality owing to his heart condition is fractionally higher than an unaffected individual and needed to be periodically monitored.

For his part, Ali's done whatever he can to manage his heart condition. He went vegan for several months last year - replacing kebabs and curries with quinoa and oatmeal. No small task for someone who had grown up on a meat-heavy diet. "If my father found out, he'd have asked me to give up football and come back home. So I never told him," he jokes. While he has made the lifestyle changes he has been advised to make, Ali still finds himself befuddled with the entire saga. "Throughout this entire experience, I've never felt any different physically to the past. I'm not training with any less intensity and I'm actually much stronger than I was a year ago. People will sometimes come up to me and ask 'Do you actually have any problem?' They find it strange as well," he says.

Ranjit Bajaj, owner of Minerva, who's supported Ali's efforts to return to professional football-providing him with legal aid, connecting him to expert medical opinion and now giving him playing time with his club -- believes Sharma's medical opinion as well as the player's own match experience over the past month is proof that he's ready to return to the top flight. "After the high court order, Anwar had to prove to the world that he can play an entire match of senior football. In the Himachal league, he played two 90-minute matches over three days and he's played three matches over five days in the Punjab league. He's had no physical issues at all." he says.

Anwar Ali's career has been in limbo since he was diagnosed with a rare heart condition last year. Maja Hitij - FIFA/FIFA via Getty Images

Of course it's not so simple. There is, to put it mildly, a lot of red tape preventing his return to top-flight football. In a letter to the AIFF last week, Ali wrote that although a couple of ISL clubs had expressed initial interest in signing him over the past month, those offers came to nothing since his case was still pending before the federation's medical committee.

The pressure is increasing, with India's mid-season football transfer window closing in another ten days. Should Ali miss out on being signed by a team, this would mean he'd have gone two seasons outside top flight football. "The reason I'm supporting Anwar so much is because I believe he truly has it in him to play for the Indian team. But two years is a huge amount of time out of top-level football, especially at his age. The longer he is prevented from playing, the harder it's going to be for him not to stagnate," Bajaj says.

Ali knows this as well. "There's a big difference between when I played before and now. Earlier, there were quality players I could learn something from. Now it's difficult to find that same challenge. I have to force myself to stay focused because the quality of opponents is not the same. I wish I could learn more. As long as you live you should want to learn and improve. The tougher my opponents were, the more I could learn. That is the point of playing," he says.

The long semi-exile is undoubtedly taking a mental toll. "After such a long time, when I knew that a couple of offers had come in from the ISL clubs it felt really good. I thought I've finally got my chance. Everyone in the academy was excited that I was getting back to the ISL. I even got some calls from my teammates from the U-17 World Cup. They had also heard the rumours and were excited to have me play once again with them. Then a week back, I learned that the clubs were not showing that interest. I just want to request the AIFF to let me play. I genuinely don't understand what mistake I'm making. I understand there is a risk but I'm willing to accept the responsibility of playing with it," he says.

There's little Ali can do but wait for an answer. "I know a little about my condition and I know that the worst thing I can do is stress myself. I have to find a way to handle the frustration when people say you should be playing the ISL. This wasn't easy but I've learned this through experience. I have to accept whatever is happening," he says.

At this point what Ali has are mainly memories. His most prized ones exist in the India jersey from the U-17 World Cup. "I had a total of sixteen pairs - eight each of the home and away kit. When I finished playing the World Cup I just gave them away to the young football players in my village. I was always sure that I'd have more jerseys in the future. Now I only have a single pair left with me. That's the only reminder I have of the time I played for India. I still hope that won't be the only chance I get. If God wills it, then I will play football at that level once again," he says.