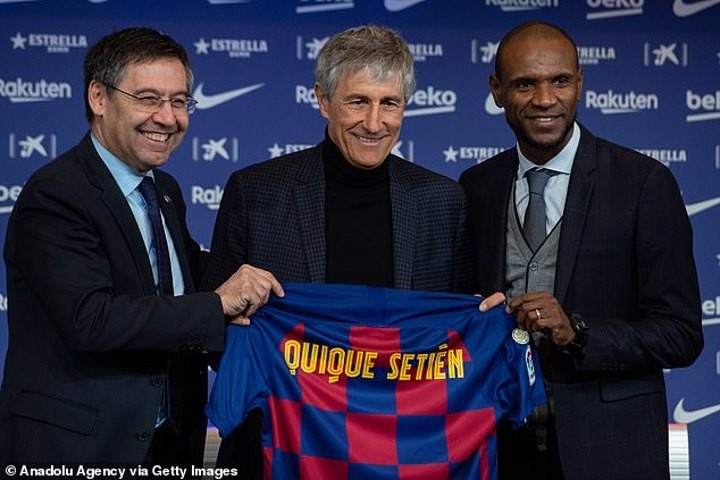 The biggest winners in Barcelona's shock decision to sack their coach in the middle of the season are undoubtedly Real Madrid who will now feel like title favourites.

Barcelona hiring Quique Setien represents a drastic change in philosophy in the middle of the campaign. The club's president Josep Bartomeu spoke on Wednesday of feeling the team needed some fresh 'impetus' if they are to win the league, the Spanish cup and the Champions League.

But then when humble Setien took the microphone he said the only thing he could promise was that the team would 'play well'.

Suddenly from being all about winning it's a return to style before results. And with a man at the helm who admits he does not have the usual curriculum of a Barcelona coach.

Zinedine Zidane will be rubbing his hands at the seismic shift because even if the changeover works in the long term it will take time and with only goal difference separating Barcelona from Real Madrid that looks like time the leaders do not have.

They have also lost their centre-forward. Luis Suarez has played a part in 41 per cent of Barcelona's goals this season. Setien said he will now look at the squad and decide if he wants a replacement. More time, more adjusting, more reason for Madrid to believe they can take advantage.

They are flying after winning the Spanish Super Cup. Fede Valverde looks like a player of the season candidate. 'His energy enables him to go from box to box during the whole game' enthused Zidane after winning his ninth straight final as Real Madrid coach.

Madrid were triumphant in Saudi Arabia without their front three and if Gareth Bale, Karim Benzema and Eden Hazard come back strong in the second half of the season there may be no stopping them pulling away from the pack.

Hazard has still not had the chance to show his worth. Today marks 50 days out for the Belgian international and the club are keen to err on the side of caution as the reintegrate him.

'My role is the same at Chelsea,' he told Sport/Foot in an interview this week. 'I am free to go where I want to and to link up with Benzema.' That remains plan A with Hazard on the left alongside Benzema and Bale on the right, leaving Valverde, Luka Modric, Toni Kroos and Casemiro to contest three midfield spots.

But thanks to the way Zidane has managed the squad and got everybody on board he now has numerous options. He can play two up and play all four midfielders. He can even leave just one up and add Isco to the midfield mix. And he has the pace and direct running of Vinicius and the flair of Rodrygo from the bench if he needs it.

At the back meanwhile Thibaut Courtois is suddenly Spain's best keeper and Madrid have now gone 19 games without losing when Rafael Varane and Sergio Ramos are together in the centre of defence.

In the last four seasons the team on top at the half way point of the season has gone on to win the league. This year things look like being different. Barcelona were top on autopilot but someone has flipped the switch to reboot, and – time will tell – self destruct. The league is Madrid's to lose.