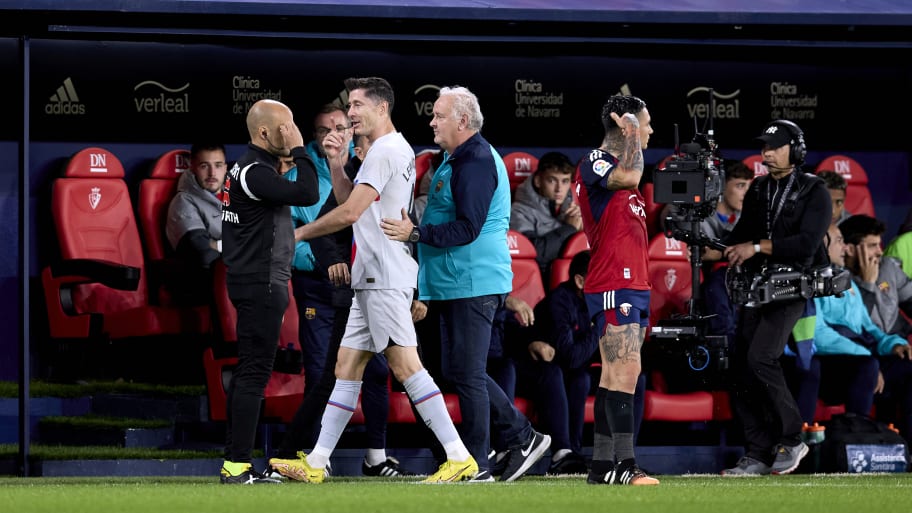 Lewa was given a second yellow on the half hour mark after Barca had gone behind in the game, but second half goals from Pedri and Raphinha ensured that La Blaugrana extended their lead at the top of La Liga to five points.

The home side started incredibly brightly, pressing high up the part and causing Barcelona a myriad of problems, and they deservedly took the lead in the sixth minute. The goal came from David Garcia, who found himself completely unmarked in the area from a corner kick to head home with aplomb.

Osasuna continued to effectively press Barca in the offensive third thereafter and almost doubled their lead when Sergio Busquets was dispossessed on the edge of his own penalty area. After Moi Gomez the ball back and fed it through to Ezequiel Avila however, the Argentine forward could only find the side-netting with his subsequent effort on goal.

Barca finally started to show some signs of life around the 20th minute mark, with Robert Lewandowski forcing Aitor into a smart save following some neat play out wide from Ousmane Dembele.

The shot on goal would prove to be Lewa's last in the game as, about five minutes later, he was given his marching orders for a second bookable offence. While he tried to plead his innocence, the forward did rather intentionally, and stupidly, clash with David Garcia while the ball was in the air.

Despite going a man down, Barcelona did manage to find the back of the net on the stroke of half-time, however Ferran Torres was adjudged have been offside when connecting with a delightful Jordi Alba cross eight-yards from goal.

Another Barca player would see red at half-time as Gerard Pique saw red without playing a single minute on his last matchday as a Barcelona player. Perhaps not the fairytale ending he was hoping for at the club.

La Blaugrana had the ball in the back of the net once again immediately after the half-time interval, but this time the goal stood. And it would come from the hugely impressive Pedri who side-footed into the bottom right corner of the net after latching onto a clearance from Unai Garca fell perfectly to him on the edge of the box.

Although Barca were expected to dominated after equalising, Osasuna really took the game to the visitors once again. The impressive Avila almost bagged himself a goal of the season contender in the 70th minute while the home side were in the ascendancy, coming close to catching Marc-Andre ter Stegen out with a whipping effort from way out on the left flank.

Osasuna came close to scoring in the 78th minute too when Kike Garcia almost backheeled a Moi Gomez cross into the net.

After missing those chances, Barca made the home side pay. In the 85th minute, substitute Raphinha sped in behind the defence to latch onto a brilliant through ball from Frenkie de Jong and loop a header over Aitor.

GK - Marc-Andre ter Stegen - 5/10 - Could do nothing about the goal and made a decent save in the second half.

RB - Alejandro Balde - 5/10 - Busy but clearly better suited to playing as a left-back.

CB - Marcos Alonso - 6/10 - Positioning left a bit to be desired a time, but didn't do anything notably bad.

CM - Sergio Busquets - 3/10 - Lost possession an utterly ridiculous number of times in his own defensive third.

RW - Ousmane Dembele - 4/10 - Not effective enough on the right flank.

ST - Robert Lewandowski - 0/10 - Sent off inside the opening half-hour. Silly.

LW - Ferran Torres - 6/10 - His runs in behind caused problems after Lewa was sent off.

This article was originally published on 90min as Osasuna 1-2 Barcelona: Player ratings as Lewandowski sees red in Barca win.