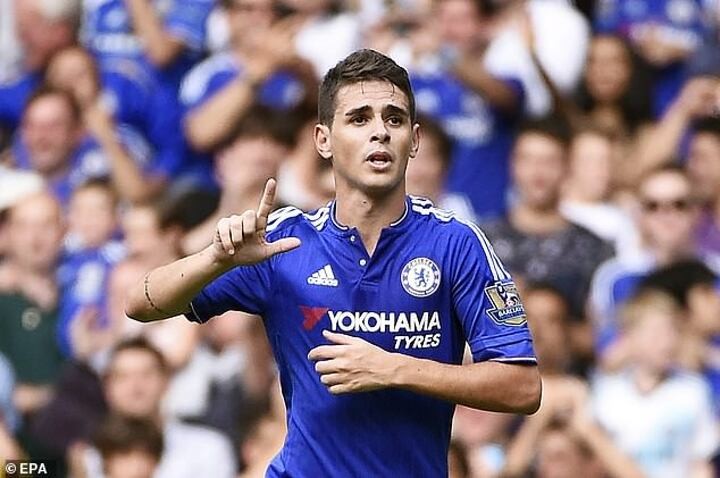 Brazilian midfielder Oscar has revealed his desire to return to Chelsea later in his career, describing his time with the club as a 'beautiful story'.

The 29-year-old has played for Shanghai SIPG in the Chinese Super League since leaving Stamford Bridge in 2017, having made over 200 appearances for Chelsea across five seasons.

And it seems Oscar, who won two Premier League titles and the Europa League during his time there, dreams of a return one day.

'I don't think about leaving China,' he told Yellow and Green Football. 'There is a great project for me here - but, to end my career, I would like to return to Chelsea.

'I built a beautiful story there and went to the Premier League very young, at a time when fans did not trust Brazilian players that much. I helped change that.

'I'll be a bit older when I try this move again but, as I am playing very well, with good stats, I feel there is still a place for me at Chelsea.

'I could take up all this interview talking about the good moments and memories I enjoyed at Chelsea, but I have two others that I appreciate the most: my first hat-trick, against MK Dons, and a game against Arsenal where I did not score but did eight slide tackles.

'The fans applauded me when I got subbed off and it felt as if I'd scored a hat-trick then too.'

The attacking midfielder scored 38 times in his 203 Chelsea games after arriving from Brazilian club Internacional in 2012 in a deal worth around £20million.

Shanghai paid £60m to bring Oscar to the then-flourishing Chinese Super League in January 2017 on enormous wages of £400,000-a-week.

Oscar made the last of his 48 appearances for the Brazil national team back in 2015 but still hopes to make a few more despite playing in China.

He added: 'It makes it harder to return to the Selecao, but I'm ready if the team needs me.

'Of course, it is a dream of mine, but I understand it is much more difficult now.'