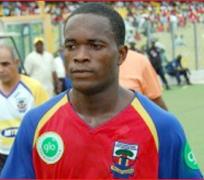 Budding striker Mahatma Otoo says he is not bothered at the spate of player departures from Hearts of Oak.

While defender Karim Alhassan has left to join Egyptian giants Zamalek on a free transfer, another stalwart defender Philip Boampong is on a verge of joining Turkish side Bucaspor.

Hearts playmaker in the last Premier League campaign Uriah Asante is currently in South Africa finalizing a move to Amazulu after the Accra-based club failed to secure a permanent deal from his Division One club, Pure Joy FC.

However, Otoo insists he is not alarmed by the situation and believes management would adequately replace the lost talents.

"I am not too worried about this situation but I believe management would do their best to replace them," he told GHANAsoccernet.com.

"Hearts is a traditional club and so expectations are high so as time goes on I am sure we'll be fine.

"I have not seen such a management who is determined to win something like this and I have absolute confidence in them to do adequate recruitment."

The 19-year-old is also looking ahead to a more successful campaign compared to last season's disappointing showing.

"Yes, the league will be starting very soon and I an focused on helping my team reclaim the league title."