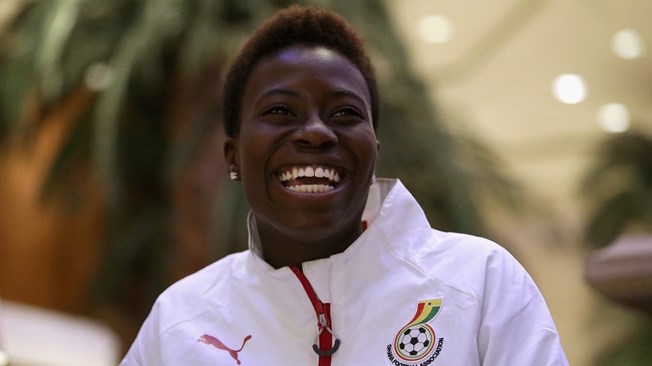 But the more Kayza Massey and her mother Karen talked about it, the more it made absolute sense. It became motivating and challenged them to bring it to life.

''I talked to my mom and told her I heard that the U17 (FIFA Women’s) World Cup of soccer would be coming soon. How cool would it be to play in it with my country,'' said a smiling Kayza, whose face was radiant as she recalled that day in early February.

''It (the idea) was so far out. It was a joke at first. But people said that was cool and we should look into it. Everyone helped.''

In the case of the Ottawa goalkeeper, her country was not Canada, but rather Ghana, a West African nation more than 8,000 km away. Kayza, 15, was born in Walewale in 2001 and at the age of one month was adopted by Karen, who was working in Ghana at the time doing consulting work for UNICEF.

How cool would it be to represent Ghana? The absolute coolest. But the road to her international soccer debut was to be filled with a few hot spots and anxious moments.

Kayza, a talented goalkeeper who went through the Ottawa Gloucester Hornets Soccer system before joining the Ottawa South United’s Ontario Player Development League U15 team last summer, and Karen began the chase without a guidebook.

They used various social media platforms, worked with Cairine Wilson Secondary School teacher/soccer coach Stuart Barber and tapped into the valuable resources of the Ghanaian community in Ottawa to reach the right people in the Ghana Football Association.

The unexpected audition request from a Ghana-born player in Canada was welcome news to the association.

After two weeks of scrambling to put all the puzzle pieces together, Kayza attended a national women’s U17 training camp from Feb. 16 to March 28 in the capital city, Accra, while living with her godfather.

Kayza impressed head coach Evans Adotey during the training sessions. But illness and a sprained right ankle during training kept her out of Ghana’s final two shutout wins over Morocco in the African World Cup qualifying tournament.

The Black Maidens listed Kayza as one of their goalkeepers for the tournament, but three others were on the roster against Morocco.

When Kayza returned to Ottawa, she was uncertain about her future with the team because health reasons prevented her from showing her full potential.

“It was a little iffy because of my injury. But I talked to the coach and he said my name was still on the list,” said Kayza, one of four eligible goalkeepers for two World Cup roster spots for Ghana’s fifth trip to the FIFA U17 Women’s World Cup.

It wasn’t until the day the Ghana team was to fly to Amman, Jordan that it was confirmed Kayza would make her international soccer debut at the World Cup, which ran Sept. 30-Oct. 21. But she would be the No. 2 goalie and, therefore, not likely to see any field time.

But just before the start of the World Cup, No. 1 goalie Martha Koffie Annan sustained a season-ending knee injury and Kayza was promoted to starting goalkeeper.

“I feel I played well in the tournament, (despite) not preparing against any national teams,” said Kayza, adding Ghana learned an invaluable lesson from its opening game loss.

Japan overwhelmed Ghana 5-0 on Oct. 1, but Kayza kept her head held high and was credited with nine direct saves. In the gold-medal final, Japan lost a scoreless match to North Korea 5-4 on penalty kicks

“Japan showed us that’s how national teams play and that’s how we had to play,” she added.

Three days later, Ghana rebounded with a major 2-1 upset victory over the United States off a late game-winning goal. Kayza also caught the eye of the referee, who slapped her with a yellow card for delaying the game once too often late in the match.

Needing a win to qualify for the playoffs, Kayza earned a shutout as Ghana downed Paraguay 1-0 to finish second in Group D at 2-1 and advance to the quarterfinals against North Korea.

Ghana came within a minute of forcing overtime, when North Korea scored in the 94th minute (fourth minute of injury time) for a 2-1 victory. Canada was third in Group B a 1-1-1 and missed the quarterfinals.

“Ghana went into the (World Cup) with the mentality that we could go all the way and be untouchable, but not overconfident,” said Kayza, who is a big thinker and bigger communicator on the field, which was helped by her teammates understanding her English directions.

“Our goal was to get to the semifinals, but it didn’t happen. But we surprised a lot of teams. Most of the countries didn’t think we’d get out of the first round. It was really surreal. I thought my first World Cup would come later in my soccer career. To have it happen now, I am in awe.”