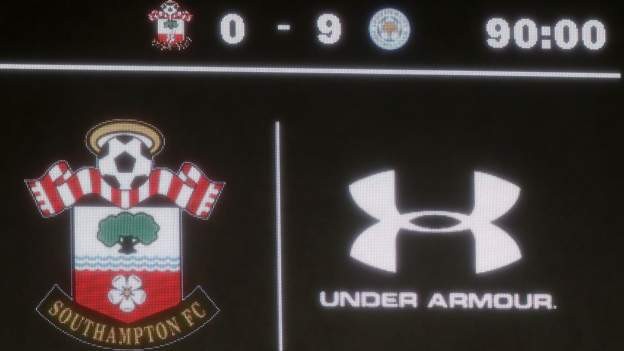 Southampton's Ryan Bertrand says the 9-0 thrashing by Leicester a year ago felt "like relegation" - but that it galvanised the club.

Sunday's home match with Everton marks the one-year anniversary of the slump at St Mary's, which equalled the biggest defeat in the Premier League.

Saints recovered to finish 11th last season and Bertrand said: "Since then, we've gone from strength to strength.

"It's a testament to the manager and the club. We've really come together."

Jamie Vardy and Ayoze Perez scored hat-tricks in that extraordinary match on 25 October 2019, as Leicester recorded the biggest away win in the entire history of the English top flight, stretching back to 1888.

For Southampton, it was a club record defeat.

At the time, they sat in the relegation zone, having lost their previous two home matches - 3-1 to Bournemouth and 4-1 to Chelsea - and looked in serious danger of losing their top-flight status.

But the lost only eight of their final 26 league matches last season as they climbed to a mid-table finish.

Speaking to Radio 5 Live's Steve Crossman, Bertrand, who was sent off early on in the Leicester game, said: "Small things built up over an amount of time that revealed themselves in one evening.

"It was almost like a relegation all in one. It allowed us to hit rock bottom, strip everything back and focus on what needed to be done.

"As a club, we all got together and chose which path we wanted to go on - and that was all together fighting for this club, a place that we love, where we love playing."

Remarkably, since that match, Southampton and Leicester have identical league records prior to their respective fixtures on Sunday afternoon, both winning 15 times and drawing six. Saints gained revenge for their humiliation by claiming a 2-1 victory at King Power Stadium in January.

Bertrand, capped 19 times by England, joined Southampton permanently from Chelsea in February 2015, having been on loan at the club.

He praised the work done for the team by manager Ralph Hasenhuttl, the first Austrian manager in the Premier League.

"He's very passionate, very clear in the type of football he wants to achieve," the defender said of the 53-year-old, who succeeded Mark Hughes in December 2018.

"To have someone that's that passionate about his job is fantastic for a player to be a part of."