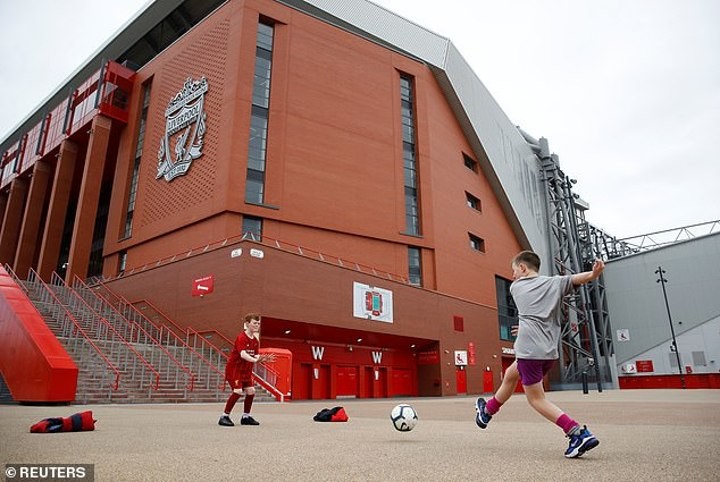 In the shadows of the Kop, a version of the trophy they covet above all others was shimmering in the midday sun.

Carlos Oynak, the owner of Georgie Porgy’s fast food restaurant on the corner of Walton Breck Road, has been plotting and preparing for this moment since he bought the venue eight years ago. It is a shrine to Liverpool, complete with seats from the old Main Stand on the walls.

Standing on a table next to the door, handle-to-handle with a copy of the European Cup, is a full-size replica of the Premier League trophy. Liverpool’s name has yet to be engraved alongside the previous winners — Carlos has not wanted to be presumptuous — but that moment is coming.

‘Without football, this city is a ghost city,’ explains Carlos, whose business has gravely suffered through this pandemic without matchday revenue. ‘Football feeds the whole city. I cannot think what Liverpool would be like without it. It’s been so long, 30 years waiting. The people want to celebrate.’

The idea that the people are going to celebrate, however, is causing the authorities some concern. Liverpool potentially being crowned champions in a game at Anfield had led police from outside the area to indicate that Jurgen Klopp’s team should be sent to a neutral venue for their denouement.

It is, frankly, a lazy conclusion that casts aspersions on all football fans. Never mind the crowds who are flocking to beaches and beauty spots in their thousands, ignoring social distancing and putting pressure on authorities, it is those who go to the match who will bring the most trouble.

When it emerged on Thursday evening that Liverpool might have to play their title decider somewhere other than Anfield, club officials — not for the first time during the hiatus — were flabbergasted and frustrated by the indication that supporters could not be trusted to stay at home.

In April, Liverpool mayor Joe Anderson suggested that bringing back the Premier League was ‘a non-starter’ because fans would congregate outside the stadium. His remarks left the club so angry that they released a statement in response and there was similar emotion on Friday.

If it is going to be difficult enough for all teams playing the final nine matches of the campaign behind closed doors, why should some have the added complication of going somewhere alien?

You wonder whether those who come up with these ideas have really given them proper thought.

Liverpool have country-wide support. If Anfield is causing some in authority headaches, have they considered the Amex Stadium? Liverpool play one of their remaining games there against Brighton, a city where they have an official supporters’ club with 2,000 members.

‘I understand the concerns people have,’ said Benny Punk, chair of the Brighton branch. ‘But this is a level of mistrust that goes back to the 1980s. It’s a lazy discrimination. The idea that there are going to be massive groups of unruly people is very, very unfair.

‘People gathering in numbers is not exclusive to football. If Jurgen Klopp came out and said the day before the match, “Do not come to the stadium”, I have no doubt people would respect him.’

And you have to know the vast majority will want to stay at home. Put it this way: if you have waited 30 years to see your team become champions, what would you do? Go to the stadium, where there are no pubs or shops open or no big screens showing the action, or actually watch the game?

‘I live just down the road,’ said Connor Irvine, a 24-year-old Liverpool fan, who came to the city from Australia. ‘I’ve been in the area since lockdown and everywhere you go, people are respecting social distancing and taking the appropriate measures.

‘Fans are not dumb. They are not going to do anything that is going to threaten us winning the title. I know from being around, the noisiest it has ever been outside Anfield was not after a football match — it was after Pink’s concert last June. It’s not fair to blame things just on football.’

One half of the city has been living for this moment and it is risible to suggest the vast majority won’t be able to contain themselves, a point illustrated when Merseyside Police assistant chief constable Rob Carden said his force ‘is ready to provide whatever policing is required — we’ve no objections’.

They are not stupid. They know people will want to go to Anfield if and when the title is secured but the key difference is that any gatherings will start long after the matches have been completed. That was always going to be the case, whether they won it in the North East or on the South Coast.

‘The game in Madrid last year, 1,000 people came outside the stadium in the night,’ said Carlos Oynak, referring to the Champions League final victory over Tottenham. ‘This is their home, this is their main place. So much has gone on, some people will not want to celebrate in their garden.’

But many will. The time will come in the future when it is right for them to gather en masse, but for now, potential parties must be small. In a city which has been crippled by the many effects of coronavirus, nobody will need to be told twice. The trophy is all they want.