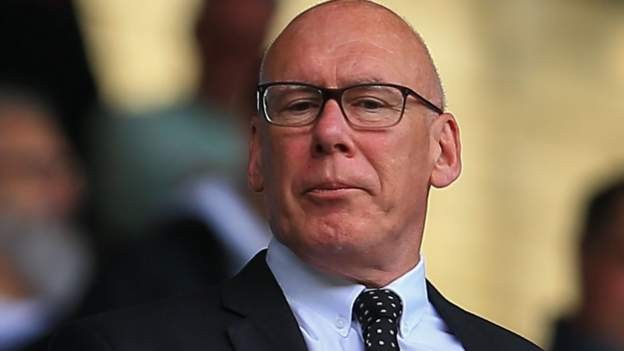 Mel Morris said the appointments of Phillip Cocu, Frank Lampard and Wayne Rooney were "not examples (...) of poor spending" at Derby

Derby County owner Mel Morris has apologised to the club's staff and supporters as the Championship side prepares to go into administration.

The Rams filed a notice to appoint administrators on Friday, which Morris says was a "gut-wrenching" decision.

They now face a 12-point deduction from the English Football League, with the future of the club's staff uncertain.

"It's tragic, there's no question. I can only apologise to the people there," Morris told BBC Radio Derby.

"Am I disappointed? Yes. Am I sorry to the fans? Yes. I desperately wanted to get this club right up there if we could do that.

"From my perspective, I've put a lot of blood, sweat and tears - and a heck of a lot of money - into this club and it's had some really good times under my tenure, but ultimately I've failed."

Rooney has sympathy for Derby staff

In a wide-ranging one-hour interview with BBC Radio Derby, Morris - who has been Derby's sole owner since 2015 - spoke in depth about the consequences of the club's play-off defeat by Aston Villa in 2019, his failed attempts to sell the club and the impact of coronavirus on finances at Pride Park.

He said he had invested - and lost - "in excess of £200m" in the club, though added that there had been "something in the region" of 15 enquiries for the club over the weekend, two or three of which he said were "very serious".

"We've got people interested in the club at this moment in time and my focus today, tomorrow - regardless of administration - is exactly the same. I want to find the best purchaser I can for this club and that continues," Morris said.

"Hopefully, on the back of that, we preserve as many jobs as we possibly can."

Despite administration hanging over their heads Derby beat Stoke on Saturday to move into the top half of the Championship, for now at least, even though manager Wayne Rooney was only able to sign free agents this summer due to a transfer embargo.

However, a likely 12-point deduction, with a possible further nine points to be docked over their accounting policies, would leave the Rams far adrift at the bottom.

"I was immensely proud of not only the fans but the players, of Wayne, of every part of that performance.

"A lot of people will have said we're down and out - the club isn't down and out, there's a lot of work to be done to get a purchaser on board and we'll help whoever becomes the administrator to do that.

"This isn't the end of this football club. This is now the opportunity to get a purchaser on board and revitalise that situation."

Morris said the impact of coronavirus on Derby had been "disproportionately higher" than many of their Championship rivals and that they would not be going into administration if it were not for the pandemic.

He estimates it has cost them around £20m in lost revenue.

"Covid has had a massive impact on the bigger clubs who were effectively pushing towards promotion but not in receipt of parachute payments.

"The numbers speak for themselves. I'm not making a spin on that."