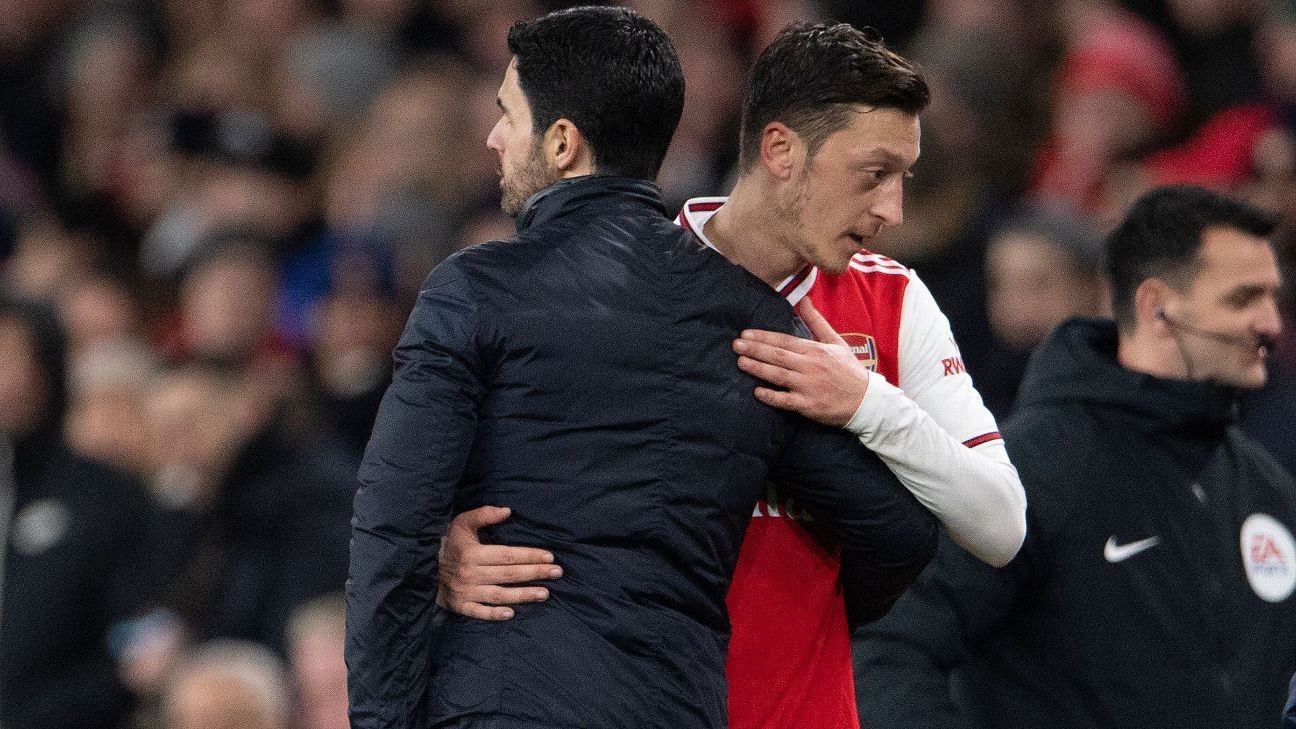 In this edition, Mesut Ozil and Arsenal's strained relationship is in the spotlight. Plus: Liverpool are keen on USMNT star Weston McKennie.

Ozil vs. Arsenal battle rumbles on

The ongoing tension between Arsenal and Mesut Ozil has largely been kept in-house but the first signs of a public relations battle emerged this week in the build-up to Wednesday's 2-1 win over Liverpool.

Sources told ESPN last month that a standoff is developing with Arsenal keen to offload the midfielder, principally due to his £350,000-a-week wage, while Ozil wants to see out the final year of his contract before moving on in 2021.

Wider financial pressures caused by the coronavirus pandemic and the possible absence of European football next season have shaped the club's stance on Ozil, whose salary is the epitome of director Josh Kroenke's complaint that the club have a "Champions League wage bill on a Europa League budget."

Head coach Mikel Arteta is happy to use the 31-year-old in squad rotation but Ozil's huge wage demands greater involvement and so the club are keen to recoup his salary and reinvest elsewhere.

Ozil has not played a minute since lockdown. The club's official website provides team news updates prior to news conferences and the player's absence for the previous six matches had been explained by "back soreness," a condition Arteta has repeatedly avoided describing in any meaningful detail.

Sources have told ESPN that Ozil did indeed have a back complaint at first -- a nagging problem he has struggled with in previous seasons -- but the injury has improved.

It was significant that just hours after Arteta had cast doubt over Ozil's availability to face Jurgen Klopp's side, the former Germany international took to social media to declare "I AM READY" in what was both a clear message to supporters and a divergence from the narrative emanating from the club.

Ozil is said to be training professionally and has refrained from going overtly public with his frustrations during this long spell in the wilderness.

That resolve will be tested the longer it goes on but with Arsenal showing great unity and spirit to beat Liverpool on Wednesday night, the club will continue to feel Ozil's absence is justified from a sporting perspective. It could be a long summer for all parties. -- James Olley

Mesut Ozil and Arsenal have an uncomfortable relationship at present. VisionhausHuge Premier League interest in McKennie

It was significant that just hours after Arteta had cast doubt over Ozil's availability to face Jurgen Klopp's side, the former Germany international took to social media to declare "I AM READY" in what was both a clear message to supporters and a divergence from the narrative emanating from the club.

Ozil is said to be training professionally and has refrained from going overtly public with his frustrations during this long spell in the wilderness.

That resolve will be tested the longer it goes on but with Arsenal showing great unity and spirit to beat Liverpool on Wednesday night, the club will continue to feel Ozil's absence is justified from a sporting perspective. It could be a long summer for all parties. -- James Olley

Mesut Ozil and Arsenal have an uncomfortable relationship at present. VisionhausHuge Premier League interest in McKennie

• 12yo arrested over racist Zaha messages

Jurgen Klopp's champions have been long-standing admirers of the United States international, sources have told ESPN, while Tottenham, Everton, Leicester City and Wolves are keen. Newcastle United are also understood to be monitoring McKennie, but any move there will likely be linked with the potential takeover of the club.

Sources say Tottenham are considering either firming up their interest in McKennie or focusing their attention on trying to sign Southampton's Pierre-Emile Hojbjerg.

Schalke want in the region of €25-30 million for the box-to-box midfielder, but clubs in the Premier League are optimistic of getting him for closer to €20m.

McKennie is also on the radar of big-spending Hertha Berlin and if he ends up moving to another Bundesliga side it will likely be to Bruno Labbadia's team, sources have told ESPN, but it is understood he favours a switch to the Premier League. -- Tom Hamilton

Barcelona defender Junior Firpo has held encouraging talks with Inter Milan and is open to being included in any potential deal for Lautaro Martinez, sources have told ESPN.

Barca signed Firpo from Real Betis last summer for an initial €18m but the left-back has struggled for game time due to the presence of Jordi Alba. The Catalan club have opened the door for him to leave at the end of the season and he's one of the players they have offered to Inter as they attempt to structure a deal to sign Argentina striker Martinez.

Firpo, 23, would complete Inter coach Antonio Conte's revamp of the wing-back positions. The Italian side have already signed Achraf Hakimi from Real Madrid to play on the right side.

However, any deal is dependent on Barca coming up with the cash to ensure Martinez can move in the other direction. That could hinge on finding a buyer for Philippe Coutinho. Barca need to sell to buy and the Brazilian is the one player the feel could bring in a significant amount of money. -- Sam Marsden and Moises Llorens

Barcelona seem to be closing on Inter forward Lautaro Martinez, but what does it mean for Luis Suarez?

...but Barca must wait as transfer talks are on hold

Barcelona hope to put a pause on all transfer activity until after the Champions League in August following the fractions caused by Arthur Melo's move to Juventus, sources have told ESPN.

Sources explain Arthur's transfer created a "distraction" at a crucial time in the season. The club's hierarchy don't want to risk further damaging the harmony of an already small squad or isolating any more players.

We look back at past Premier League transfers with a simple question: Who was the best signing in the history of the competition?
• Full list: 100-51 | 50-1

Barca remain open to offers for a large chunk of their squad this summer, including Nelson Semedo, Ivan Rakitic and Arturo Vidal, but will park any negotiations until their Champions League campaign comes to an end.

They will listen to bids for players not involved with the first team -- like Jean-Clair Todibo and Moussa Wague -- but want everyone else focused on helping the club win their sixth European Cup next month.

Arthur, 23, has not featured since the end of June when Barca confirmed he would join Juve at the end of the season in a deal worth up to €82m. Coach Quique Setien said on Wednesday it's unlikely he will be involved again this season unless it's "essential and necessary." -- Sam Marsden and Moises Llorens

play1:09Ogden: Sancho deadline is a transfer game being played

Mark Ogden believes Sancho will move to Man United eventually, it's just a matter of when.

Neymar will celebrate the third anniversary of his arrival at Paris Saint-Germain on Aug. 3 and, sources have told ESPN, he has never been happier in the French capital. Since his return from Brazil after the lockdown, the PSG No. 10 is even declaring his love for Paris to teammates and the people close to him.

This is the best news possible for PSG who are hoping the 28-year-old will extend his stay at the Parc des Princes beyond June 2022, the end of his existing deal. The club's sporting director, Leonardo, had a meeting planned with Neymar and his dad before the lockdown and the signs were positive then.

"He is very happy and for the first time, Paris feels like home for him," a source told ESPN. "It took time but he feels great at the club and in the city now. He has his favourites places, he knows more and more people and after the lockdown he has realised what a great city Paris is."

When Leandro Paredes celebrated his 26th birthday at the Cesar restaurant, not far from the Champs Elysees, on June 29, Neymar was the leader of the party. Since then the Brazil international has organised lunches and dinners and even got Kylian Mbappe, Thiago Silva, Keylor Navas, Paredes and a few others together to celebrate Bastille Day on July 14, posing for a photo with the Eiffel Tower in the background.

At training, Neymar is also smiling more than ever and PSG head coach Thomas Tuchel has been delighted with the positive energy given by his superstar. Now, all this joy and happiness will have to be translated onto the pitch starting on July 24 for the French Cup final against Saint-Etienne before the Champions League restarts a fortnight later. -- Julien Laurens

The transfer window is not open yet but the biggest deal of the summer could already be in place with 21-year-old Lille striker Victor Osimhen set to seal an €81m move to Napoli, sources have told ESPN.

There are only minor details to finalise between Lille and Napoli but the revelation of the Ligue 1 season, who has scored 18 goals in all competitions this season, will depart just one year after moving to France from Belgium for €12m.

Osimhen wanted to come to England to fulfil his dream to play in the Premier League and several clubs were interested although the price demanded by Lille put them off.

Not Napoli, though. The Coppa Italia winners pushed really hard to convince Nigeria international Osimhen to join them. They invited him to Italy for extensive talks with manager Gennaro Gattuso and has now decided to move to Campania.

Osimhen also just changed agent to speed things up with Napoli. His new agent is William D'Avila who is close to the Lille owner and has good contacts in Italy as well. By signing one of the most coveted players in Europe, Napoli are making a strong statement about their intentions for next season. -- Julien Laurens

Manchester City were delighted to have their Champions League ban overturned by the Court of Arbitration for Sport on Monday but club chiefs remain puzzled as to how they have still incurred a fine, sources have told ESPN.

City have been ordered to pay €10m -- a reduction from the initial €30m fine handed down by UEFA -- for "failing to cooperate with the UEFA authorities" regarding alleged financial fair play violations.

The club however, insist they handed over everything demanded by UEFA and any "failure to cooperate" was only because they could not cooperate any further.

Privately, City were always extremely confident of having the suspension lifted, even rejecting a reduced punishment before UEFA's announcement of their suspension in February. -- Rob Dawson

The Champions League will adopt an MLS-style bubble when the competition is concluded with an eight-team mini-tournament in Lisbon next month, with sources telling ESPN that UEFA will impose strict medical protocols to help safeguard against COVID-19 infections.

The MLS is Back Tournament at ESPN Wide World of Sports Complex in Orlando has each team based in the same place to ensure that as many as 2,000 participants can be tested in the same location. The competition, though, has been dogged with issues since FC Dallas pulled out because of a high number of positive COVID-19 tests, before Nashville SC followed suit.

While the eight Champions League quarterfinalists are unlikely to be holed up in the same hotel in Lisbon, sources have said that the squad, management and officials will all be expected to remain within their own bubble when not taking part in fixtures.

There will be no opportunity for those attached to each club to enjoy their spare time by experiencing the sights of the Portuguese capital.

Testing protocols have yet to be finalised, but it is anticipated that UEFA will adopt the Premier League approach of twice-weekly testing for all those inside each bubble. -- Mark Ogden