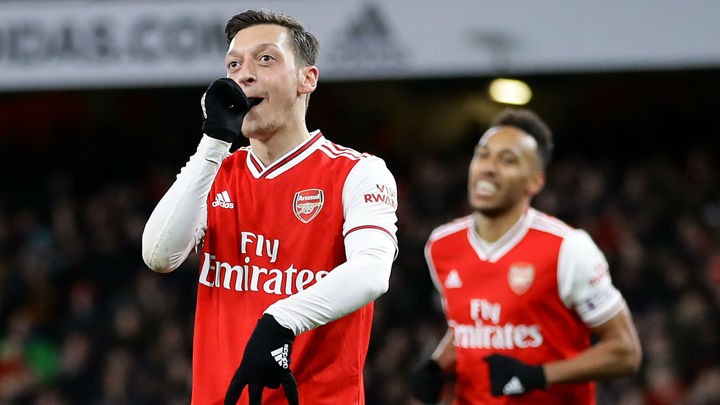 Arsenal’s conjured up the definitive example of a team goal during their 4-0 win against Newcastle on Sunday, with Mesut Ozil’s late strike breaking the record for most passes leading to a goal in the Premier League so far this season.

The German got on the end of Alexandre Lacazette’s neat lay-off and beat Martin Dubravka with a close-range strike in the 90th minute to put the result beyond doubt at Emirates Stadium.

It was Ozil’s first goal since April and although Dubravka perhaps could have done more to keep the shot out, there was no doubting the quality of the build-up.

The Gunners made 35 passes in the lead-up to the goal, the most in the division so far this season, with all 11 eleven players, including goalkeeper Bernd Leno, having a touch.

The afternoon would get even better for Mikel Arteta’s side, with Lacazette wrapping up victory in the fifth minute of stoppage-time.

It was Saka’s eighth assist of the season in all competitions, more than any other Arsenal player. It also means Saka has assisted more Premier League goals than any other teenager this campaign, though some have questioned whether his deflected cross for Gabriel Martinelli’s goal against Sheffield United last month should go down as an assist.

It was the north London club’s first Premier League win since New Year’s Day and lifted them up to 10th in the table, six points behind fifth-placed Tottenham.

Though it was just their seventh Premier League win of the season the convincing manner of the victory suggests the team is starting to settle under new boss Arteta, who only arrived at the club in late December.

They will now turn their attention to the Europa League and a trip to Olympiakos in a last-32 first leg on Thursday before hosting Everton back in the Premier League next Sunday.