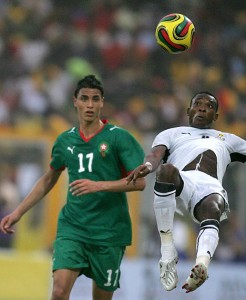 Ghana and Fulham defender has donated US$20,000 to a four-team football tournament in his native Brong Ahafo to help sustain the struggling clubs in the region and encourage youngsters to take up to the game rather than crime.

The competition involving his former club Berekum Arsenals, BA United, Berlin FC and Bofoakwa Tano has been put together by his charitable foundation.

The tournament will be played at the Golden City Park in Berekum on 11 July. The winner will take home US$10,000 as the Fulhamâ€™s playerâ€™s contribution to help them to prepare for the new season and buy desperately needed equipment The second-placed team will earn $5,000 while the third and fourth placed teams will take home $3,000 and $2,000 respectively. Paintsil insists he wants to use the competition to encourage kids to take up to the game and also help clubs who are preparing for the news season.

â€œThis is where I started my career and it is only right that I can give something back to the region that made me as a footballer,â€ Paintsil told Ghanasoccernet.com.

â€œThe idea is also that with this amount of money the clubs can go on to prepare for the new season as its difficult to run clubs in Ghana.

â€œAs the matches are open free to the public, the kids who will come there and see some of the great players from the region will be encouraged to play football and take it seriously.

â€œIt is another of helping them avoid bad things like crime and think that they can also earn a living through the game.

â€œThis region has supported me so much and I am all too willing to help where I can, not only in my region but also in any part of my country.â€

Paintsil was a key player for Ghana at the World Cup in South Africa where they finished at the quarter final stage.