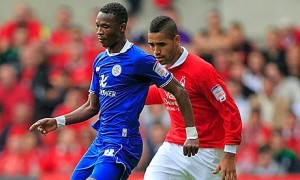 Ghana defender John Pantsil believes his Leicester City team has the qualities to qualify to the English Premier League next season despite their shaky start.

Last week's 3-2 win over second-placed Southampton eased the pressure on the team.

The Black Stars right-back who joined the ambitious side last month remains optimistic they can play top-flight football next season.

"We have a good manager and players who want the best for the team and so I believe if we continue to work hard, we'll qualify to the Premier League," Pantsil said.

"I really want to be part of the history and after playing in England for the past five or so years, I have absolute faith in our qualities to excel this season in the Championship.

"It's early day yet and there many matches to be played and so we are not perturbed at all."

Pantsil, 30, was out-of-contract with Fulham and Eriksson pounced on the free agent to boost the Foxes squad ahead of the new season.

Pantsil, capped 66 times by Ghana, fell out of favour at Craven Cottage under Mark Hughes last season and he was not offered a new deal beyond this summer.

The experienced defender arrived in England in 2006 at West Ham United before making the switch to Fulham.