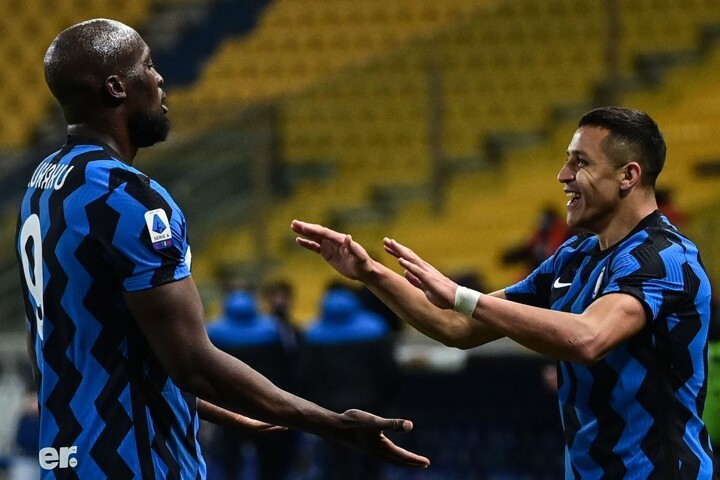 Inter extended their lead at the top of the table to six points, as Alexis Sanchez bagged a brace to beat Parma 2-1.

The Nerazzurri knew this was a big opportunity after Milan were held by Udinese last night, so Lautaro Martinez was the only man rested, despite Monday’s upcoming showdown with Atalanta. Gervinho, Andreas Cornelius, Joshua Zirkzee and Andrea Conti were out for Parma, who were in penultimate place and had fumbled 2-0 leads to draw 2-2 in their last two games.

Luigi Sepe had to get his hand to a dangerous Achraf Hakimi pull-back in the opening minutes, but after Juraj Kucka’s effort was charged down, the hosts had penalty appeals rejected when VAR confirmed Dennis Man had kicked Nicolò Barella rather than the other way round.

Parma started well and Samir Handanovic needed a great save on Jasmin Kurtic’s header from close range on Hernani’s cross from the right.

Christian Eriksen had an extraordinary chance on 31 minutes when Hakimi pulled back from the by-line, but he’d over-run the ball and it was behind him six yards from an open goal.

On the stroke of half-time, Lukaku nodded Perisic’s cross wide of the back post. However, Parma also threatened, as Dennis Man’s flicked header flashed just past the far top corner.

Man had suffered a knock when colliding with Alessandro Bastoni and had a dizzy spell, so made way for Valentin Mihaila at half-time.

Inter found the breakthrough when Lukaku tried to chest down a Brozovic pass, but it ricocheted into the path of Alexis Sanchez. Although Sepe got a hand to it, Riccardo Gagliolo was unable to clear off the line in time.

Perisic wasted a good chance to make it 2-0 moments later, firing over rather than setting up Lukaku, then just as Parma had a series of attempts charged down, Inter scored a second on the counter.

Lukaku did most of the work, running from midfield, shrugging off defenders and placing the perfect pass so Alexis Sanchez just had to sweep home from 12 yards.

The Chilean tried to return the favour with a cross to the back post, but Lukaku nodded wide.

Instead, Parma got one back when a Giuseppe Pezzella ball was floated from the left, it went over Karamoh and found Hernani unmarked to volley in.

Hernani’s free kick was also charged down and Graziano Pellè made his Parma debut, but there was not a repeat of the 2-2 draw at San Siro in October, as Lukaku was back defending in stoppages on a corner.