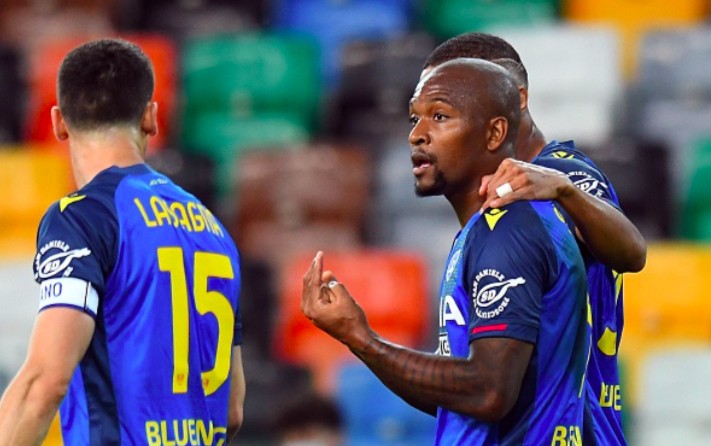 Udinese and Parma each saw leads slip in Friuli on Sunday evening but it was the hosts who came out on top with a 3-2 win thanks to a late Ignacio Pussetto strike.

The points were Udinese’s first of the season having lost in each of their opening three matches of 2020/21, coming up short against Hellas Verona, Spezia and Roma.

Parma were lucky not to have found themselves behind early on as Samir powered a header over the crossbar that he should have done better with, but that attempt did prove to be a sighter for what was to come.

Stefano Okaka then had a chance of his own to put the Zebrette in front on the end of a counterattack but his effort was straight at the feet of Luis Sepe. The Gialloblu’s first attempt of note came through Juraj Kucka, though his shot from outside the area didn’t pose too many problems for Nícolas Andrade in goal.

It was from a similar distance that the breakthrough came for Parma, though it was Hernani who found the net with a long shot of his own. Having easily skipped by Tolgay Arslan, the Brazilian sent a low shot into the bottom corner from around 25 yards that was aided on its way by a slight deflection to put it out of Nicolas’ reach.

That lead only lasted a matter of seconds though as Samir made amends for his earlier miss. Again on the end of a cross, the centre-back made no mistake as he powered a second attempt past Sepe. Hernani had the chance to double his and Parma’s tally after the break but he fired wide with a left-footed strike from inside the area.

Parma were their own worst enemies as they handed Udinese the lead shortly after. With the Crociati trying to build from the back, Jasmin Kurtic lazily gifted the ball to Roberto Pereyra who, having reached the byline, looked to find Okaka in the centre but his pass deflected into the net off a hapless Simone Iacoponi.

Parity was restored by Yann Karamoh midway through the second half but Udinese were left cursing one of their former players as it was a perfect cross from the left from Giuseppe Pezzella that allowed the Frenchman to tap in from close range.

Things quietened down from there until very late on when Udinese got back in front. Okaka did well to hold up the ball and keep Parma’s defenders away before laying it off for Pussetto who, after setting himself with a touch, picked out Sepe’s bottom-right corner from outside the box to seal their first win of the season.

The post Parma's struggles continue as Udinese get off the mark first appeared on Forza Italian Football.