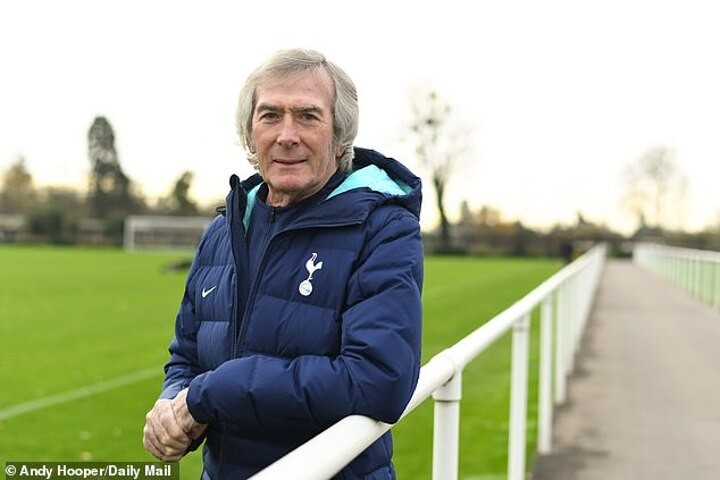 The first thing to know is that Pat Jennings is still working. He is 75 now but two days a week the young goalkeepers of the Tottenham academy benefit from a great man’s wisdom.

Jennings knows too well what inactivity feels like. ‘When I packed up football after the 1986 World Cup, I was not involved in the game,’ he says. ‘I would get up in the winter, pull the curtains back and if it was raining and I couldn’t get out on the golf course I went back to bed. After a few weeks you realise you’re just wasting.

‘So when Ossie Ardiles asked me back in 1993, I went in to Tottenham one day a week. Then two, then three. This is my 27th year on the staff. I was here 14 years as a player. Forty-one years. Who would have thought that?’

Jennings is a statesman of British football. Another, the late Jimmy Armfield, once said he had a voice ‘as deep as the Irish Sea’. That has not shallowed. Nor has his enthusiasm for work.

‘I didn’t enjoy the summer lockdown,’ he tells Sportsmail. ‘I am used to kicking and volleying balls. I was back in as soon as possible and immediately felt great. Then the next day I seized up! But I love it.’

Jennings has played and worked under 16 Tottenham managers. He also played for two at Arsenal. He is a rare breed, a player to have represented both north London clubs. Tomorrow at Stamford Bridge, Spurs play Chelsea as league leaders. Then, next weekend, it is Arsenal at home. It is an important eight days.

‘The club feels like it’s on the up,’ says Jennings. ‘It is where it should be. It’s a big club. It always felt like that when I played.

‘I introduced myself to Jose Mourinho and he said, “You don’t have to tell me who you are”. That was nice. But the young keepers here don’t necessarily know me. I tell them their parents might know. Or their grandparents!

‘I never even had a goalkeeping coach until Bob Wilson at Arsenal in my 30s. In my day you just looked after yourself. I learned by playing games and making mistakes. I did OK.’

Jennings played 590 times for Tottenham and 327 times for Arsenal. He won 119 Northern Ireland caps and played in two World Cups. He was the Football Writer’s Player of the Year in 1973 and won the PFA award three years later. He did OK.

Had football not called, Jennings might have stayed on the mountains of Newry for ever.

‘I left school at 15 and worked in a linen factory for £2.18 a week,’ he says. ‘I’d put the envelope on the table for my mother every Friday. I was second eldest. We had 11 in the house. The factory closed so my dad took me with him to work on the timber gang on the mountain. The sawyer would fell about 100 trees and it was my job to trim the branches with a hatchet. I loved it, apart from when the snow was coming over the top of my wellington boots. I thought I would do that job for ever. I wouldn’t have complained.’

Football was not played in County Down’s Catholic schools but Jennings was proficient at Gaelic football. That was to prove important. He had played in goal for an Under 19s street side when he was just 11 so when he filled in as an emergency goalkeeper for his brother’s team, a natural athleticism and huge leap were not long unnoticed.

A quick transition through local club football to the Irish national youth team led to a match at Wembley against the English in front of 35,000 in 1963. Ireland lost but Jennings did not, not in the long run. Before long Watford of the English Third Division called.

‘I got £23 a week but was 17 and would have played for nothing,’ he says. ‘The physical element didn’t bother me because of Gaelic football where you had to look after yourself. Crosses were no bother. I could just reach up and pull the ball down with one hand. People said my hands were big. They aren’t. I just knew how to use them.’

Transfers in Jennings’ day often happened quickly and without ceremony. Players were often last to know. So it was that the teenage Jennings was strong-armed into Tottenham by Bill Nicholson and Watford manager Bill McGarry in 1964. He was hurried out again just as unexpectedly by Keith Burkinshaw 13 years later.

‘Bill McGarry called me back from Ireland for early summer training but when I got there it wasn’t about that at all,’ Jennings says. ‘He said Bill Nicholson was waiting for me at Vicarage Road. I had only been at Watford a year. My head was spinning.

‘Bill Nick was offering me £35 a week. I was already earning that with bonuses at Watford. He didn’t believe me. So I went back to Ireland. He wrote to me a week later asking if I’d thought any more about it. Then he and Bill actually flew to Belfast. McGarry said if I dare come back to Watford I would be training morning, noon and night. They needed the money and wanted me out. So I signed.’

Jennings’ years at White Hart Lane were in keeping with the way the club likes to see itself. The football played by Nicholson’s team was adventurous, glamorous and sporadically successful. Jennings won the FA Cup, two League Cups and the UEFA Cup.

Jennings loves Tottenham. It is his club. Nevertheless the way his playing career ended there in the pre-season of 1977 was ugly. ‘Burkinshaw just came to me in training one morning,’ Jennings recalls. ‘He said they were selling me and Bobby Robson at Ipswich would call me at 6pm. I couldn’t believe it. It was the worst day of my life.’

Jennings did not go to Ipswich, nor Manchester United or Aston Villa, who also enquired. He crossed the divide to Arsenal instead. ‘Arsenal were a great club and 10 minutes down the road,’ he say. ‘My kids not being dragged up the country was important. I had literally lived for Tottenham for 13 years. Under Bill Nick it was “Tottenham, Tottenham, Tottenham” you know? But they made it clear they didn’t want me.

‘I went to say goodbye to the lads next morning. The directors blanked me. They were pushing out stories that I wanted to leave and was being greedy over a contract. It was rubbish. Everywhere I went people were asking me how on earth I could quit Tottenham for Arsenal. They were blaming me. Now whenever I do a dinner, people can’t believe the truth. I kept it to myself all those years.’

Jennings was 32 when he joined Arsenal. He stayed for eight years, playing in three consecutive FA Cup finals, 1978-80 — winning one — and a European Cup-Winners’ Cup final. Does he remember his first visit to White Hart Lane as an Arsenal player? ‘Yes because we won 5-0,’ he says. ‘I was motivated, of course. Listen, I have been at Tottenham for 41 years so there is no doubt where my loyalties lie. But I will never say a bad word about Arsenal. They were brilliant to me.

Sir Bobby Charlton described Jennings as ‘one of the greatest of all time’. The Manchester United icon’s diagnosis with dementia did not pass his old foe by.

‘Bobby is a great man,’ he says. ‘It’s unbelievable to look at the numbers. Ex-players are three times more likely to get dementia. It’s hard to believe there isn’t a link. In my day everyone had big centre forwards up against big centre halves. They would spend hours in training heading balls. You look back now and wonder.’

It has not been a good month for football. Two weeks ago, former Liverpool and Spurs keeper Ray Clemence died. ‘He lived down the road and we had been working on Tottenham hospitality for years,’ says Jennings. ‘Ossie lives nearby, too. We would drive in together.

‘I was briefly back at Tottenham in 1985 as back-up. Ray was their only fit keeper and was an absolute gent, a great team-mate and a fabulous keeper. When you look at what he won — phenomenal.’

Jennings has his views on modern goalkeeping. He wonders if there is too much emphasis on their ability to kick but also marvels at some of the things his young charges at Tottenham can do. He envies them the chance to work at Tottenham’s beautiful training centre but laughs when it is suggested the putting green by the driveway was put there for him. ‘It’s actually for Gareth Bale,’ he chuckles.

In terms of the modern player’s lifestyle, it would not have been for him. Nor would the scrutiny of live TV. Jennings confesses he did not always enjoy the games.

‘It was the pressure of maybe making a mistake,’ he says. ‘I preferred it when it was over and I knew I had a clean sheet. The cup finals were the worst because you knew they were on television. Now everything is. Everyone is still waiting for the goalkeeper who will never make a mistake. I can tell you he hasn’t been born yet.’

Back in Northern Ireland Jennings is cherished. The pitch he played on in Newry is named after him, as is a lounge at Windsor Park in Belfast. He returns home often for work with the Irish FA. There used to be a suite carrying his name at White Hart Lane, too. In it were two glass cases containing his memorabilia.

Sadly the courtesy has not been extended at the new stadium, so where are his trophies and caps now? ‘Up the attic,’ he says.

Sometimes modern football fails us but then it was not always perfect back in the day, either. Jennings and Burkinshaw bump into each other at golf days and are on reasonable terms, though the latter has never explained why one of the country’s most esteemed keepers was sold so prematurely.

‘I know now and it was explained in Bill Nick’s book,’ Jennings says. ‘There was legislation due out that said if you’d been five years at a club you were due a free. They feared I could go and had better get some money. They got £40,000. Was it Keith’s decision or the directors’? Nobody has ever said.’

Jennings, now also an ambassador for McDonald’s, lived a football life that was shot through with colour. He debuted for Northern Ireland as a 17-year-old. George Best also played for the first time that day and they shared a room for years. In 1982, Jennings played as Northern Ireland downed Spain on their own turf in the World Cup. But a white shirt and blue shorts are all that he really sees when he thinks back across the last four decades.

The business of his leaving Spurs still rankles but it transpired he had a bond with his club that one bad call was never going to break. ‘I couldn’t ask for more in terms of a place to work,’ he says.