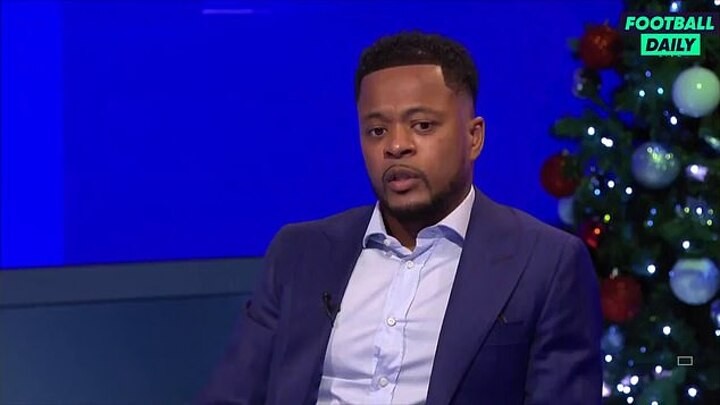 Patrice Evra has taken a dig at Liverpool fans for a lack of 'class and respect' as the former Manchester United man shared a letter from the Merseyside club apologising for the 2011 Luis Suarez incident.

The Uruguayan forward was banned for eight games and fined £40,000 for using the word 'negrito' towards Evra during a Premier League match between Liverpool and United at Anfield in 2011.

But immediately after Evra made the allegations against Suarez, Liverpool defended their player and even wore t-shirts in support of the striker before a league game against Wigan in 2012.

When Suarez returned from his ban later on in the season, he refused Evra's offer to shake hands with the Manchester United captain in the return fixture at Old Trafford in 2012.

Along with an image of a 2019 apology letter from Liverpool chief executive Peter Moore, Evra hit out at the Liverpool fans who have given him abuse in the years following the incident.

Evra captioned the letter before Manchester United's Premier League tie with Liverpool on Sunday: 'I wish the Liverpool fans had the same respect and class as you Peter Moore.'

It is the first time Evra has shared the letter from Liverpool, which discussed a 'collective regret' in supporting Suarez after the Football Association had banned him for racist abuse.

The French defender had opened up about the Suarez incident during an episode of Sky Sports' Monday Night Football in October 2019 and Moore felt compelled to write to Evra after hearing his ordeal.

The letter read: 'The reason for my correspondence is both straightforward and necessary, we owe you an apology. It was remiss of us not to apologise long before now and that is a mistake we need to take responsibility for.

'As a club, we failed to live up to our own high standards of inclusivity, equality and fairness when confronted by your serious but wholly justified allegations eight years ago. This is a matter of collective regret.

'I would hope that subsequent events have demonstrated that we did learn lessons from the period in question. As much as those lessons were painful, they were also absolutely necessary and I want to assure you that we will continue to take heed of them going forward.'

Evra revealed back in January 2020 that Moore and Liverpool had sent him an apology for the entire scandal following his 2019 appearance on Monday Night Football.

Furthermore, ex-Liverpool defender Jamie Carragher and current club captain Jordan Henderson - who were both playing for the Merseyside club at the time - both revealed the Reds made an error in publicly supporting Suarez and apologised to him.

Speaking on Sky Sports, Evra said: 'I was pleased Jamie Carragher apologised. I received a personalised letter from Peter Moore and I was really touched about it.

'(He sent the letter) three days after the show. I was like, "thank you very much, this is really touching my heart."

'But I was really disappointed for such a long time about a big club like Liverpool supporting a cause like that.'

The FA handed current Manchester United striker Edinson Cavani a three-match ban after he used the same racial term on social media towards a friend, despite the Uruguayan's insistence that it was a friendly term.

Suarez joined the Uruguayan FA in condemning the English FA for handing Cavani the ban, which they described as a 'discriminatory act'.

Liverpool host Manchester United on Sunday in a top-of-the-table clash, with the latter sitting three points ahead of Jurgen Klopp's Premier League champions.