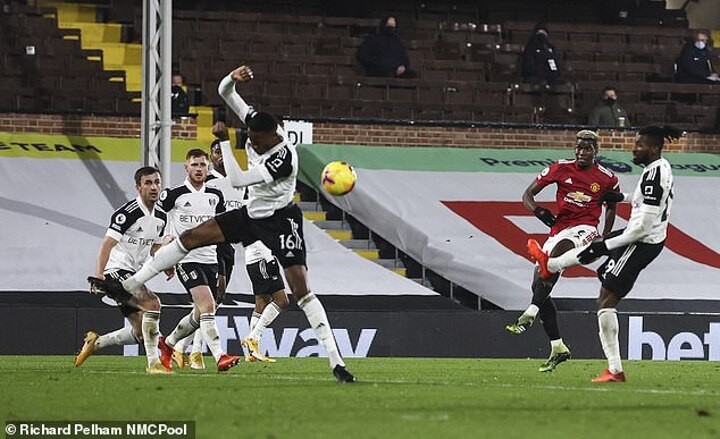 Rio Ferdinand has heaped praise on Paul Pogba after his stunning winner against Fulham which sent Manchester United to the top of the Premier League on Wednesday night.

The Frenchman, who is in the midst of an excellent run of form in Ole Gunnar Solskjaer's side, scored the decisive goal with a terrific curling effort with his left-foot in the 65th minute.

It was enough to send United top again, above Man City and Leicester, and ex-United defender Ferdinand believes Pogba is 'one of the best' when playing at his current level.

I think today he [Pogba] was brilliant, he did both sides well, defended well but created chances, the big difference is that he is playing quick, not dilly dallying on ball, the efficiency he is playing well is amazing,' Ferdinand told BT Sport.

'I don't think Ole completely trusts him in the centre of midfield with the pace that some sides counter with, so he plays him out of those area, but in this game they felt they would dominate and so he can allow him to do it. One of the best when he is in this form.

He loves the game, wants to showcase his talent. I saw Pogba grow up, I saw his talent first-hand, I think he is capable of playing in the midfield, if he has the players around him he can do it.'

Pogba also netted the winner at Burnley last week and his influence is growing in this United side firmly in contention for the title.

'He has not been as consistent as he would have liked, but right now he is one of the more important players,' Ferdinand added.

'Top players use negative press as fuel. But the passion cannot be used if you are not playing, he is now.'

Pogba himself could not hide his joy post-match, labelling his match-winner 'beautiful.'

'I hit the ball well,' Pogba said. 'I didn't expect it with the left foot like this but if you don't try, then you don't score.

Asked if it was better than his winner at Burnley, he said: 'I would say yes because it was with the left foot. It wasn't my favourite goal ever but a goal is a goal.'