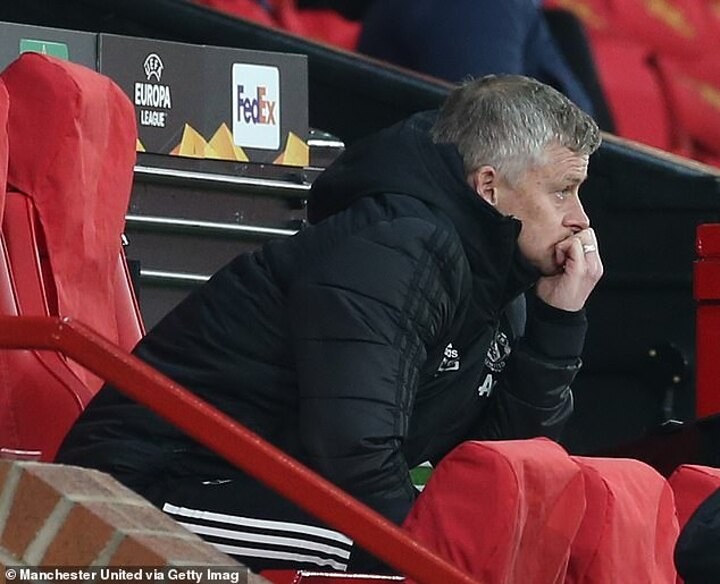 United made it safely through to another European knockout round with a goalless draw at Old Trafford on Thursday night, which was enough after the club's thumping first-leg victory in neutral venue Turin last week.

The Europa League was one of three competitions where Solskjaer's side exited via the semi-final stage, while United also lost in the Carabao Cup last four earlier this year.

Scholes told BT Sport: 'It hurts him. Four semi-finals for him which isn't great because you need to go to that level now.

'You've seen them do well to get to second in the league, then fall away. They went top then unfortunately they went on a sticky run and fell away.

'They have got to find that extra quality, big players in big games. If Man Utd want to go to the next level, win titles, win cups - these players need to step up.'

Despite the triumphant first-leg result against Sociedad last week, Solskjaer picked a strong second-leg side that included starts for Bruno Fernandes, Anthony Martial while Marcus Rashford was a second-half substitute.

Scholes highlighted the importance of Portuguese star Fernandes, who has 22 goals in 38 matches so far this season, in United's bid for success - but called on the club's other stars to step up to the mark.

The ex-midfielder added: 'There's no doubt he (Fernandes) is a great player, great quality, he has to lead this team to trophies. He can't do it by himself.

'There's a nucleus at the club that is good enough to nearly win something. They've haven't improved yet to win something, they have to do that.'

But Scholes does believe, however, that the Europa League is a brilliant opportunity for the club to create a culture of winning despite a top-four spot and Champions League qualification being pretty secure via the domestic route.

There are several British teams remaining in the competition as Arsenal, Tottenham and Rangers secured progression to the last-16 stage this week as well.

Scholes claimed: 'Man United can (win the Europa), not sure about the other (British) teams. Man Utd have the best squad in the competition. This is a great chance for United to win something.

'They (the other British clubs) think they are in a good chance, but Man United are much better than Arsenal and Tottenham. Italian football and Spanish football are nowhere near as good as it used to be.'