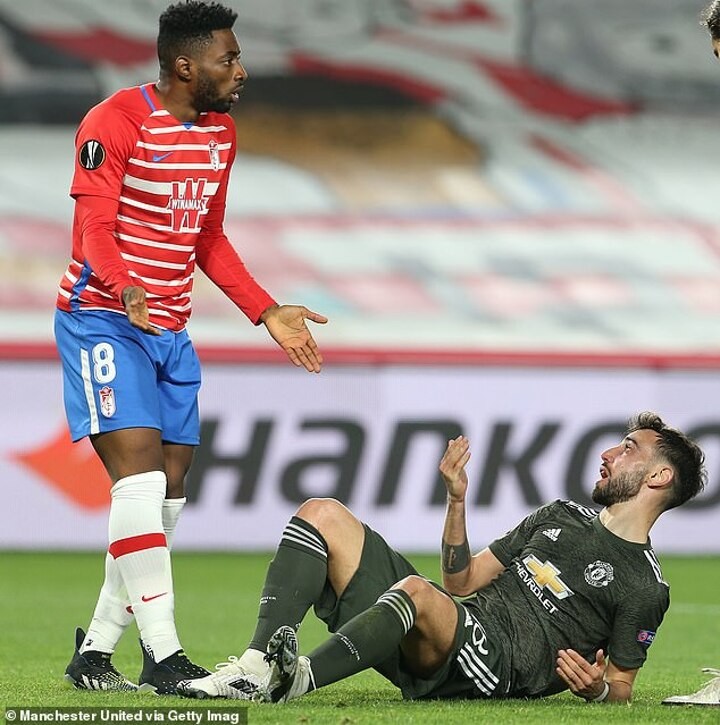 Manchester United legend Paul Scholes says the Red Devils were 'lucky' to be awarded a late penalty during the 2-0 victory over Granada.

Ole Gunnar Solskjaer's side looked like they were going to take a 1-0 lead back to Manchester, when they awarded a 90th minute penalty.

Granada midfielder Yan Eteki was judged to have obstructed Bruno Fernandes, who then tucked away the penalty.

It wasn't the best penalty by the Portuguese midfielder, but his shot spilled through the hands of goalkeeper Rui Silva, giving United a comfortable advantage going into the second-leg.

However the BT Sport pundits were not so sure that it was a penalty and agreed that the LaLiga side were 'unlucky' to be punished.

Owen Hargreaves said after the game that though Eteki caught Fernandes, the way the Portuguese star went down made the referee's mind up.

Scholes added: 'He makes a meal of it I think he's lucky to get the penalty. Lucky to score it as well as the goalkeeper should do better.

'You know what it's given and it goes to VAR they're going to give it because it's not a clear and obvious error and he has touched him, so there's no way they were going to overturn it.

'Fernandes does very well to get the penalty, they'll be very disappointed. He was just feeling where his player is and the ball's nowhere near him anyway.

'It was always Cavani going to get the header. Fernandes was very clever and he's fooled the referee and he's fell for it.'

The goal could make a significant impact in the second leg, with a number of United players missing the second-leg through injury of suspension including Harry Maguire, Luke Shaw and Scott McTominay.

Hargreaves said with two away goals for United, he believed it would be almost impossible for Granada to find a way back into the tie when the sides meet up for the second-leg.

He said: 'Even at 1-0 I would say there's not much of a chance but thing is with one goal you do have somewhat of a chance.

'At 2-0, I just can't see them scoring a couple of goals. For United, a clean sheet and scoring two goals has sealed it for them.'