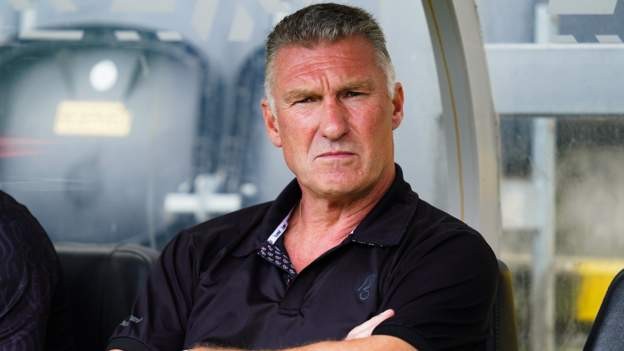 The Robins lost their first match of the new season 2-1 to Hull City on Saturday, during which the Tigers were awarded a controversial penalty.

Pearson also wants VAR to be brought into the Championship.

The video assistant referee was used in the English Football League for the first time in May's play-off finals.

"It should help them and it makes them [referees] more accountable," Pearson told BBC Radio Bristol.

"I also think what we should adopt in football - which for some unknown reason the powers that be will not go down that route - is to do what they do in rugby and to mic them up so we can hear what's being said, so it's all transparent, there's nothing to hide.

"Technology should be there to help the officials.

"I think it would be better for the game if there was transparency as to what the process is when decisions are made. I don't know why they don't do that. Maybe they're afraid?"

Referees wear microphones in rugby union for international and top league matches, which fans inside the stadium and staff on both teams can listen in to as officiating decisions are made.

A television match official (TMO) is also available, for the referee on the pitch to consult with and review incidents around scoring and foul play.

However, the rules have been adjusted since, including referees now being encouraged to use pitchside monitors more often.

During the match with Hull on 30 July, the referee awarded the home side a penalty which levelled the score to 1-1, when Kai Naismith was adjudged to have brought down Benjamin Tetteh.

In his post-match interview, Pearson said there was "absolutely" no contact.

"Did we have some poor decisions against us? Absolutely yes." Pearson continued.

"I've heard the argument about the fact that some grounds aren't set up for it [VAR]. When you look at the standard of a lot of the stadiums in the Championship, I don't know whether that's an argument which is valid to be honest.

"We can have a system which helps the officials to come to a decision but, like I say, they shouldn't have anything to hide.

"I think we should be able to hear what they're saying at least then we all know in the stadium what the reasons are."