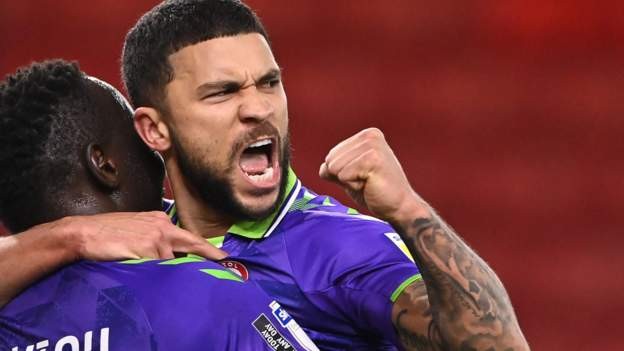 Famara Diedhiou's brace - a header and a coolly-placed right-foot shot - and Nahki Wells' superb solo run and finish had the visitors 3-0 ahead before half-time.

Dael Fry did manage to pull a goal back for Boro with 10 minutes left but they were unable to undo the damage from a dominant first-half display by the Robins.

Victory was City's first in the league since the end of January and their first away from home since 1 December.

Defeat for Boro dented their hopes of breaking into the play-off places after back-to-back wins had moved them to within three points of the top six.

Former Boro centre-back Pearson, who was appointed as successor to Dean Holden on Monday, watched on from the stands at the Riverside while one of Holden's former assistants, Paul Simpson, and Keith Downing took charge on the touchline.

The ex-Leicester City and Watford boss, who has agreed a deal until the end of the season at Ashton Gate, would have been delighted with what he saw from his new side.

They made a terrific start even before Diedhiou headed home a cross from Adam Nagy for the opener and his 50th goal for the club.

Wells had a goal-bound effort stopped on the line as Paddy McNair raced back to cover while Diedhiou then forced a superb left-handed save from Marcus Bettinelli with his shot from the edge of the penalty area.

But once they took the lead, there was seemingly no stopping a resurgent City.

Diedhiou soon added to his opening goal when he and Wells combined on the break to set up a low finish under Bettinelli's body.

Moments later, they had a third as a hopeful clearance by Tomas Kalas from his own byline was flicked on by Diedhiou for Wells to meet on halfway and then outpace a despairing Jonny Howson before he rounded Bettinelli for the finish.

Boro tried to find a way back into it in the second half but Fry's goal, after Sam Morsy's shot was parried away, was all they had to show for it.

City keeper Dan Bentley clawed away an in-swinging Marvin Johnson corner onto his crossbar and Boro's Neeskens Kebano had a shot on target blocked after Duncan Whatmore's through ball, but the visitors kept them at arm's length.

Pearson will officially take full charge for the first time when Bristol City travel to Swansea on Saturday.

Attempt missed. George Saville (Middlesbrough) left footed shot from the centre of the box is too high. Assisted by Marvin Johnson with a headed pass.

Han-Noah Massengo (Bristol City) wins a free kick in the defensive half.

Jack Hunt (Bristol City) is shown the yellow card for a bad foul.

Marvin Johnson (Middlesbrough) wins a free kick in the defensive half.

Attempt missed. Sam Morsy (Middlesbrough) left footed shot from outside the box is close, but misses to the left.