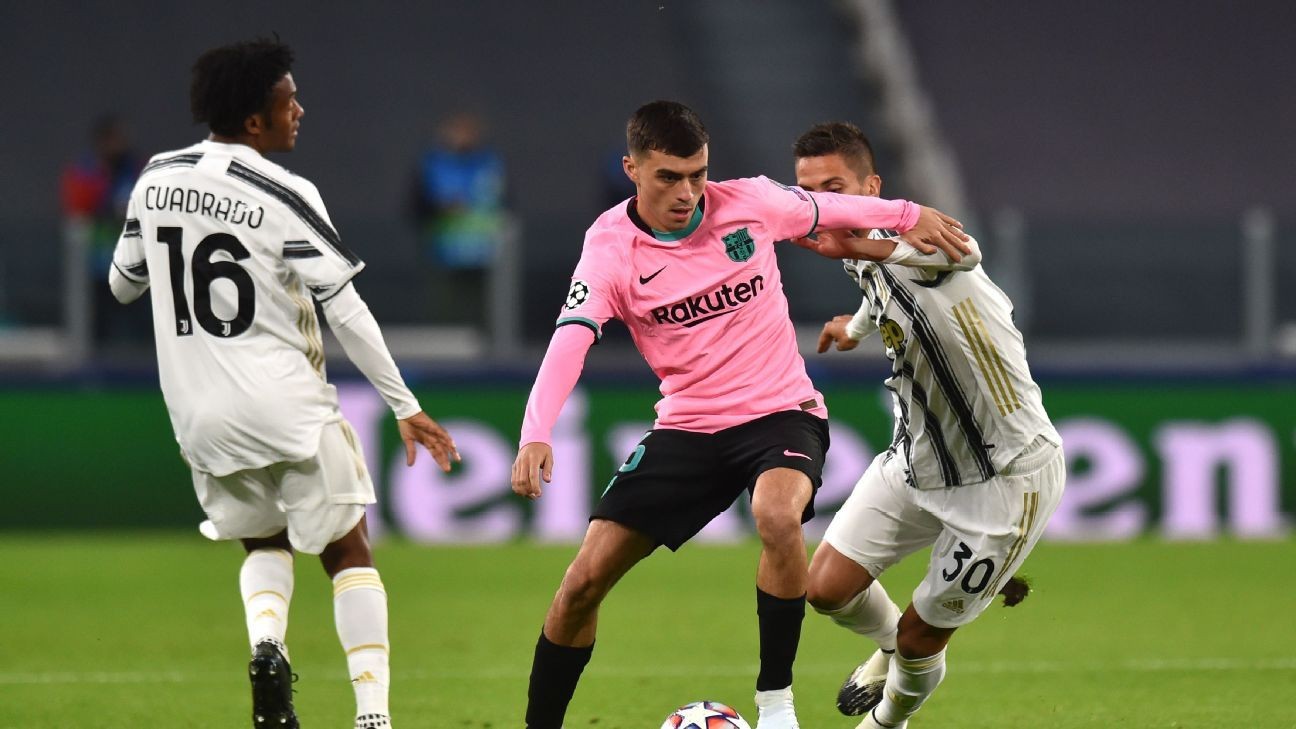 Ousmane Dembele and Lionel Messi were on target as Barcelona bounced back from their Clasico defeat to Real Madrid with a 2-0 win against Juventus in the Champions League on Wednesday. Dembele opened the scoring in the first half with a deflected effort from distance and Messi sealed the three points with a late penalty after Ansu Fati was fouled in the box.

Alvaro Morata had three goals disallowed for offside for Juve, who ended the game with 10 men following Merih Demiral's red card in the 85th minute. Coming just a day after president Josep Maria Bartomeu resigned, this was a major and much-needed step in the right direction for Barca.

Pedri was an unexpected starter in the Clasico at the weekend but this felt like the game when he really announced himself to the world. On this showing, the 17-year-old forward will have a big role to play in Ronald Koeman's side this season.

Dembele's goal -- his second in a week -- will also serve as a big confidence boost to the Frenchman. Now he just needs to stay fit.

Barca now have six points from two games in the Champions League and will back themselves to make the last 16 from here. With a doubleheader to come against Dynamo Kiev next and then an away game against Ferencvaros, they should have things wrapped up before they face Juve at Camp Nou in their final game.

Barca lost Ronald Araujo to injury to leave them with no cover for Gerard Pique and Clement Lenglet in the middle of defence. Samuel Umtiti is also injured and with Pique suspended here, Frenkie de Jong had to fill in at centre-back. Araujo will undergo tests on a thigh problem on Thursday.

Another minor complaint is that this game could have been wrapped up earlier. Messi, Dembele and Antoine Griezmann were all guilty of wasting chances and Barca need to improve their efficiency in front of goal.

7 -- Koeman got the better of Andrea Pirlo in this clash between two of Europe's biggest sides. Picking Pedri and Dembele proved to be masterstrokes.

GK Neto, 6 -- Morata had three goals ruled out by VAR but the goalkeeper had little to do in terms of real saves against his former club.

DF Sergi Roberto, 6 -- A reliable performance at right-back but hard to believe he did enough to get back ahead of Sergino Dest in the pecking order.

DF Ronald Araujo, 6 -- The young Uruguayan did not look out of place at this level before getting injured at the end of the first half.

DF Clement Lenglet, 6 -- With Pique missing, he led the back four. Defended well and passed out from the back under pressure impressively.

DF Jordi Alba, 6 -- Got into good positions but was a little erratic. Blasted one big chance over the bar.

MF Miralem Pjanic, 6 -- Gave the ball away a lot early on -- and in dangerous areas -- but you can see what he will add to this side when fully fit. Much more mobile and active than Sergio Busquets.

MF Frenkie de Jong, 7 -- Filled in at centre-back in the second half and did a really good job alongside Lenglet.

Young Pedri was extremely impressive on Wednesday, looking calm and comfortable on a big occasion. Photo by Tullio Puglia - UEFA/UEFA via Getty Images

FW Ousmane Dembele, 7 -- Scored the opening goal and grew in confidence after that. A joy to watch when running at full speed with the ball, although his decision-making in the final third still needs some work.

FW Antoine Griezmann, 7 -- Had some nice moments, including a back-heel pass to set up a chance for Messi, but once again was found wanting in front of goal. Hit the woodwork early on and missed one good chance in the second half.

FW Pedri, 8 -- Already looking like a €5 million bargain. With his touch, technique and trickery, he gave Juan Cuadrado a torrid evening on the Barca left.

FW Lionel Messi, 8 -- Linked well with the other members of Barca's attack and would have had several assists if his teammates had finished better. Scored his third goal of the season late on but is still waiting for his first from open play.

MF Sergio Busquets, 6 -- Came on for the injured Araujo, swapped positions with De Jong and helped Barca's pressing high up the pitch.

FW Martin Braithwaite, N/R -- Koeman brought him on in stoppage time after Barca has already bagged the second goal.