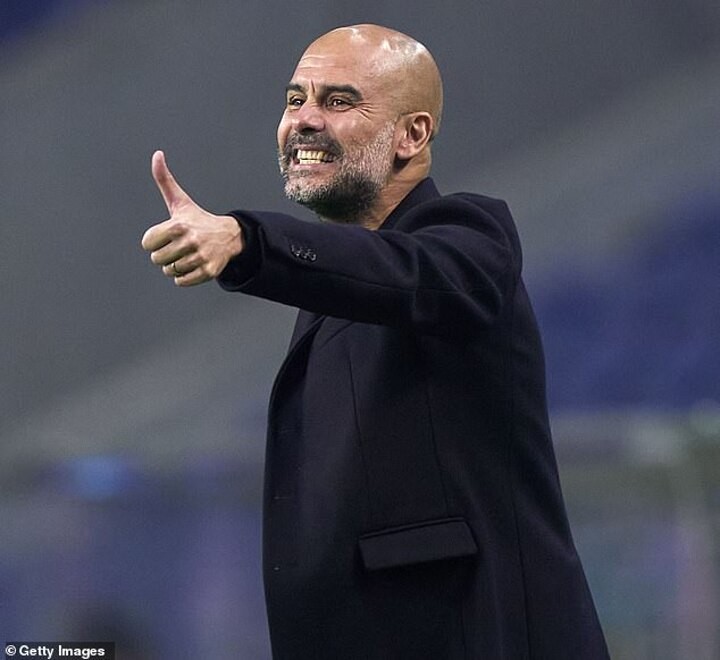 Pep Guardiola hailed his Manchester City side despite them drawing blank in their tight goalless Champions League clash with Porto which saw them confirmed as group winners.

City had already secured qualification for the last 16 with two games remaining, and faced little threat from the hosts at the back at the Estadio do Dragao.

But Guardiola's side were unable to force a way through and make it five wins from as many group matches, with Ruben Dias missing  from a yard out and Gabriel Jesus having a goal ruled out for offside.

Porto meanwhile needed just a point to join City in the knockout stages, and set up with a defensive shape to hold on for a draw, but Guardiola was more than happy with what he saw from his side.

'Unfortunately we couldn't score but we came here to finish first. We are happy, I guess, and Porto as well.'

City will be looking to go deep into the tournament having exited at the quarter-finals stages for the last three season.

But they have rarely looked troubled in Group C this season and after winning their first four games without issue, they remain unbeaten in the competition in 2020-21.

'A big, incredible compliment and congratulations for the team for all the group stage, especially the games we play away. We played with huge personality and courage,' Guardiola added.

'In this period - and with the way this season has started - the Champions League was tricky. When you lose one or two games or draw, always you have to go to the last game and with the Covid situation and injuries always there would have been a risk.

'But we have done an incredible group stage. I know it is (considered) a disaster if we are not able to do it but we know the other groups were difficult - incredible teams are finding it difficult to qualify.

'So this competition is really, really difficult. If you slip one or two games everything is going to be complicated from the beginning.'

City may now choose to rotate even more for next week's final group game against Marseille, with crucial Premier League matches against Fulham this Saturday and then the Manchester derby the following weekend to take centre stage.

'I am more than delighted with the performances in these games. We have one left - nothing to play (for), just maintain the rhythm,' Guardiola said.

'It is a day to be happy. Now it is time to forget the Champions League until February and focus on the Premier League.'

Porto boss Sergio Conceicao meanwhile said: 'We achieved qualification with an impressive series of games on our part.

'It is our 16th time in the round of 16, more than double that of all other Portuguese teams. We carry the name of Portugal in Europe very high.

'We showed good moments of defensive organisation tonight, although it was difficult to get up front as we wanted - much because of City, who react well when they lose the ball.'