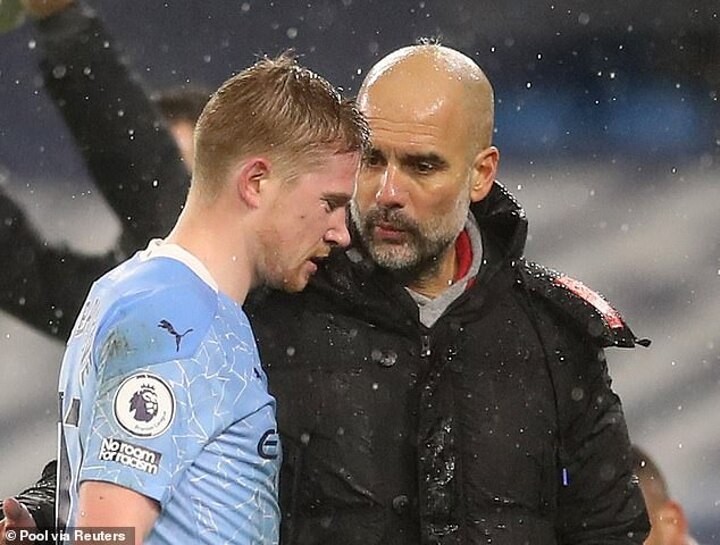 Belgian De Bruyne looked to have sustained a leg muscle injury and was replaced on the hour mark at the Etihad Stadium, while full back Kyle Walker went off in the first half after a collision with Villa's Jack Grealish.

'I haven't spoken to the doctor,' Guardiola told a news conference. 'If Kyle asks to be out, it is because something happened. Hopefully it is just a kick.'

Guardiola said De Bruyne's injury could be a result of a packed schedule.

'Kevin put his hand on his leg, so I have the feeling it will be something muscular,' the Spanish coach said.

'It is normal, these things happen with this amount of games.'

City have won six straight league games and are two points behind leaders Manchester United, who have played a game more.

Aston Villa were infuriated after Manchester City's controversial first goal on Wednesday was allowed to stand despite an apparent offside.

Bernardo Silva broke the deadlock in the 79th minute at the Etihad but profited from Rodri, who had burst back into play despite being clearly beyond the defensive line, before then interfering and teeing up the strike.

Villa boss Dean Smith was dismissed from the touchline after loudly complaining against the decision - and even BT Sport's pundits were left bemused by the chaos.

Villa were able to stand firm and repel the hosts on several occasions but had finally been dealt the killer blow through Silva's superb arrowed finish.

The playmaker picked up the ball on the edge of the penalty area before driving forward and smashing beyond the impressive Emiliano Martinez.

It was the interference from Rodri, however, which saw tempers spill over inside the Villa technical area.

Rodri was able to dispossess a hesitant Tyrone Mings and laid the ball off for Silva.

It took a deep dive into the laws of the game to discover that, due to Mings' attempt to deliberately play the ball, the phase of play reset and Rodri was brought onside.