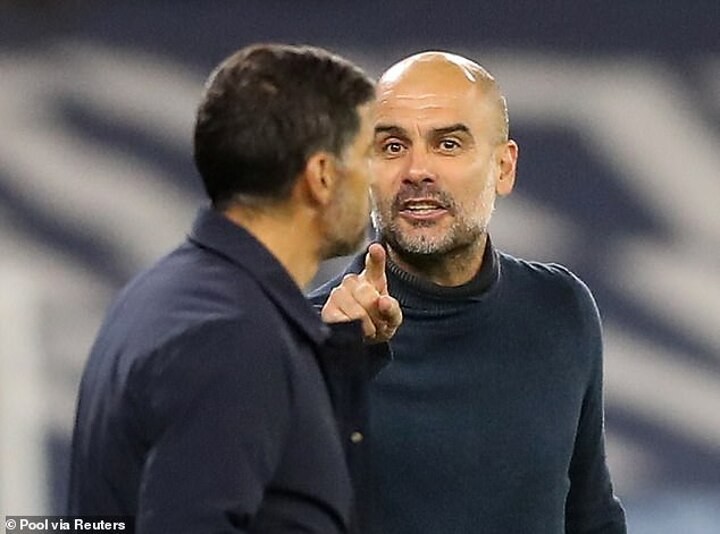 Manchester City require a draw in Portugal to guarantee qualification as group winners and there remains animosity from the first meeting in October.

City came from behind to win that 3-1 at the Etihad on a night that left Conceicao incensed by Guardiola's alleged 'extremely unpleasant behaviour' on the touchline.

The pair repeatedly clashed, with Guardiola accused of 'speaking about our country using ugly words' during spats between the two benches.

'I don't agree with him, it's not true,' Guardiola said. 'We didn't pressure the referee, we are not this type of team who do this kind of thing. I would admit it.

'If there's an action you do not agree, you can make a comment with the assistant but that's one specific action. But it's not a part of who we are. The five years we are here – and before then in Germany or Spain - our behaviour speaks for itself.'

Sources in Portugal raised eyebrows at Conceicao's outburst on Guardiola's character, with one detailing that the former Lazio winger regularly has run-ins with his own staff.

Guardiola – who is again without striker Sergio Aguero - expects a similar edge at the Estadio do Dragao.

'It will be a tough physical game as it was here,' he added. 'They fight for each other, they have outstanding physicality.

'Porto have to win every weekend and that makes them so dangerous. We expected it would be difficult when they came here and tomorrow will be the same.'

Aguero's absence is after feeling a twinge in his knee over the weekend and, despite City having already progressed to the last 16, Guardiola is reluctant to throw in younger players.

Midfielder Tommy Doyle is the only academy product included in the travelling party.

The City boss also demanded that Benjamin Mendy maintains his 'focus' after two encouraging displays over the past week.

Mendy scored in Saturday's win over Burnley and Guardiola said: 'It's so important for us that he's fit, but scoring goals is the last thing I want from him.

'What I want from him is to defend well, to be fit and be focused. That is what everyone wants from Benji. But the first step is that he has played two lots of 90 minutes and played quite well but with Benjamin it depends on him.'