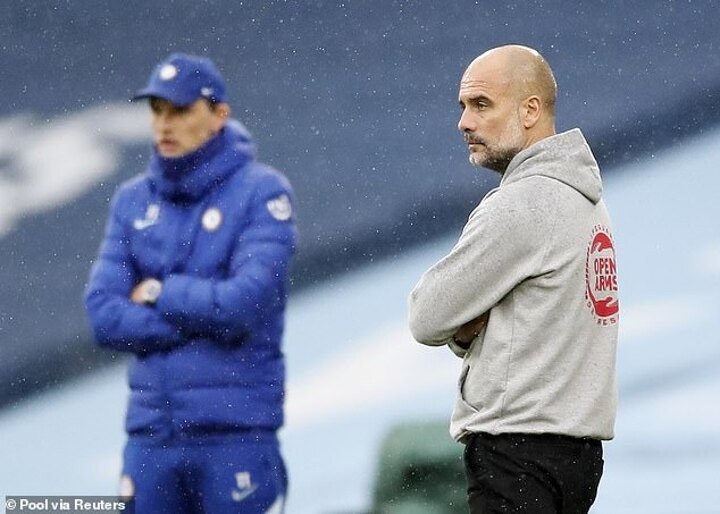 Pep Guardiola knew he had a problem the moment Thomas Tuchel was appointed at Chelsea. If there is such a thing a Guardiola Mark II, the Bavarian-born coach is the closest you would get to that.

If Manchester City hadn’t already been forewarned that next season’s title won’t be quite so straightforward, here was the confirmation.

Specifically regarding the Champions League final, this was perhaps an inaccurate form guide, City having made nine changes. But Tuchel’s team are one of few in world football who would cause City to fret in a one-off game.

Here they temporarily delayed City’s title celebrations. More significantly they again outsmarted and outcompeted a Manchester City side. There were some caveats. City had made nine changes from their win over Paris Saint-Germain and what might be considered the first team. But the reserves were worryingly flat. Legend Sergio Aguero, an embarrassing shadow of his former self, the intermittently effective Gabriel Jesus and Benjamin Mendy, schooled by Reece James, are unlikely to be sweating on their starting places for the Champions League final.

At least there was some consolation for City in that Guardiola ought to have got his annual overthinking-it-tactical-blunder event, usually reserved for the most important game of the season, out of his system. At times it looked as though the coach who aspires to play with a whole team of central midfielders was asking Rodri to run the entire show on his own, with five defenders and four attackers. Even with Mendy and Joao Cancelo as wing backs, he looked alone.

Even more so in the second half, when Chelsea started breaking at speed into space, putting runners in behind City. And Chelsea made their own changes after their epic victory over Real Madrid.

Much of the fear factor Chelsea induce is down to Tuchel. You know exactly what you are going to get with Chelsea. All the players perfectly understand their roles.

They move together coherently, like the well-drilled outfit they are. They have dangerous runners.

Even the back-up players, like Callum Hudson-Odoi, who has barely featured recently, stretched City when he came on.

Hakim Ziyech, who scored the FA Cup semi-final goal that beat City, was equally effective here, getting the equaliser. James kept getting past his man, causing mayhem down the City left. Timo Werner and Hudson-Odoi had second-half goals disallowed for offside, the latter marginal.

Tuchel’s team look like they are building to something special. ‘The feeling now in the dressing room, everyone is super tired,’ he said. ‘Everyone who was out there gave his last drop in intensity and work rate and this is what you need to really feel this strong bond and strengthen this bond, these wins, these big games. You need to be a bit lucky...’ —he was referring to Aguero’s penalty miss and Raheem Sterling’s potential penalty claim — ‘… but the group is doing everything to force the luck on our side. No, we catch the momentum of another big win and increase our self-confidence in a natural and healthy way.’

Tuchel was right. His team really do make their own luck. ‘Could we have lost the game in the four minutes before half-time?’ asked Tuchel. ‘Yes. Would that have been deserved? No. I had the feeling we were tired in the first half, slow in decision making and rushed our attacks. But half-time we said: ‘Let’s continue as though it’s 0-0. Don’t lose our heads because of these last few minutes. Step up, play with courage, have more ball possession in their half.’

‘And this is what the guys did. And the momentum changed completely with the goal. I could feel the confidence growing and we played with more and more quality, pressure and we never stopped attacking. It is a huge win and fantastic second-half performance.’

His players also have to work extraordinarily hard and they are phenomenally well organised, All the hallmarks of a Guardiola side. They are of course a little more direct, a little more likely to play the ball forward quickly. But all the same, you can see the influence.

Though they are only three years apart in age, Guardiola was something of a role model to Tuchel in his formative years. Without an illustrious playing career to project his coaching credentials, the German’s path to the top has been a longer and harder one.

He was always desperate to meet Guardiola, even back in 2008, when he had just taken over at Mainz and tried, without success, to fix a meeting in Barcelona. Finally, after leaving Mainz and being on a sabbatical year, he arranged a rendezvous in a swish Munich restaurant, Guardiola then being Bayern coach. Witnesses say the pair exchanged ideas with the ferocity and enthusiasm of a couple of academics debating a scientific proposition. Pepper pots were moved around the table as Tuchel quizzed his quarry.

Tuchel really is made in the mould of Guardiola, in his obsessiveness to challenge tactical theorems and find fresh ways to create space. Their personalities match. And for Guardiola, that is a problem next season when City have a Premier League title to defend. And more imminently in three weeks’ time, when that Champions League final is played.

‘We have 21 days,’ said Guardiola. ‘We will see what happens in the final. It’s a different competition.’

But the younger man is hunting down his one-time mentor. He beat him in the FA Cup semi-final. He beat him here.

Let’s see what he can do when Pep has the A team out.