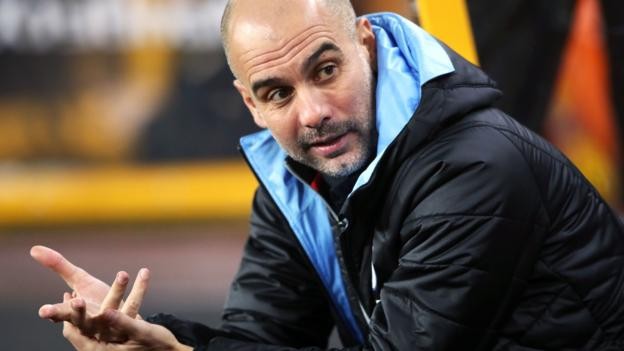 Pep Guardiola says he is "100% staying" as Manchester City manager next season.

It has led to suggestions Guardiola will trigger a break clause in his contract, which runs to 2021.

However, speaking before Saturday's home game with Crystal Palace, Guardiola said: "Unless they sack me, I am staying, 100%."

City were third in the Premier League before winning 3-1 at Manchester United in the first leg of their Carabao Cup semi-final and beating Aston Villa 6-1 to go back above Leicester.

"It's not because we have won the last two games," Guardiola added. "Even if it was going bad, I'm not going anywhere.

"No manager wins all the time. I enjoy working with these players. We've lost some games so it is simple, we need to work out what we can do better."

Guardiola celebrates his 49th birthday on Saturday, which means he will be 23 years younger than Roy Hodgson in the opposite dugout at Etihad Stadium.

Guardiola was only five when Hodgson began his managerial career at Swedish club Halmstad.

The Spaniard marvels at how the former England boss has retained his enthusiasm for the game, although Hodgson's wife, Sheila, may not be too pleased at Guardiola's assessment.

"I think when you are training at 72, it must be boring at home," he said.

"Our job is nice. You are working with young people, athletes, in competition. Every game is different. Maybe that's why Roy and the other older managers do it. I am not going to retire next week or next year but I don't think I will still be a manager at that age."

Meanwhile, City's French defender Aymeric Laporte is closing in on a comeback.

Laporte has been absent since August, when he suffered a knee injury against Brighton.

He has been training with the first-team squad for a couple of weeks and although Guardiola has ruled the 25-year-old out of the Palace game, it is understood he may be in contention for a return when City host Fulham in the FA Cup fourth round on 26 January.